On November 16, 1989, six Jesuit priests, their co-worker and her teenage daughter were massacred in El Salvador. A U.S. Congressional Task Force verified that those responsible were trained at the U.S. Army School of the Americas (SOA) at Fort Benning, Columbus, Georgia, USA. This is only the most notorious incident in the school's history of providing special training to Latin American military personnel known to have committed atrocities and engaged in torture.

In 1990 Father Roy Bourgeois, who had lived for many years in Latin America, moved into an apartment outside the main gate of Fort Benning and founded the School of the Americas Watch (SOAW). That year 10 people fasted for 35 days outside the gate of Fort Benning. However, from this small beginning, SOA Watch grew quickly, drawing on the knowledge and experience of many in the U.S. who had worked either in Latin America or in solidarity with movements there in the 1970s and '80s.

At the latest Fort Benning demonstration -- on November 23, 2008 -- 20,000 people joined a solemn funeral procession at the Fort's gates commemorating those who suffered and were martyred by the graduates of the School of the Americas. Thousands of people came to Columbus, Georgia for the whole weekend to attend workshops, a Saturday rally, and evening concerts as well as the annual Sunday vigil. Six people were arrested for going into Fort Benning. 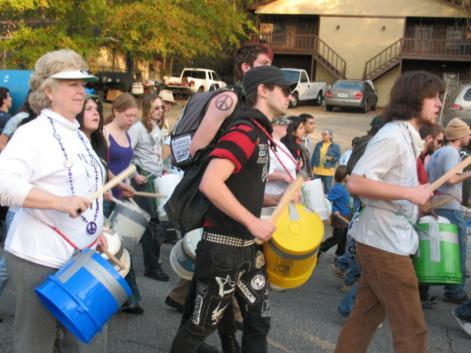 Today, the SOA Watch is a large, diverse, grassroots campaign rooted in solidarity with the people of Latin America. Its goal is to close the SOA and to change U.S. foreign policy in Latin America by educating the public, and participating in creative, nonviolent protest, as well as media and legislative work to urge Congress to cut off funds for the training. The last Congressional vote to end funding lost by only 6 votes. With a new Congress and new president, the chances of closing the SOA have improved.

Work has also taken place in Latin America, with SOAW activists visiting countries to encourage them to withdraw their troops from the school. In February Bolivia become the fifth country after Costa Rica, Argentina, Uruguay and Venezuela to announce it will no longer send its police or military to be trained in the U.S.

The Pentagon has responded to this pressure with a public relations campaign to give the SOA a new image, renaming it in January 2001 as the Western Hemisphere Institute for Security Cooperation(WHINSEC). But the campaign continues to call it SOA – “School of Assassins”.

The campaign to close SOA has always been rooted in a commitment to nonviolence. All who participate in the nonviolent direct action and all who attend the vigils and demonstrations make a commitment to the nonviolence guidelines. The guidelines, which have gone through a process of revision over the years, are distributed to all participants, and are read collectively throughout the annual November demonstrations at Ft. Benning.

In the 1990s hundreds and then thousands engaged in mass nonviolent action by crossing the boundary line and walking onto the base where they were stopped and removed. Preparation consisted simply of a large orientation session. Many were handed 'ban and bar' letters, warning them they would be arrested if they returned. Of course, most did return and to prepare for their arrest, there were no direct action preparation meetings for these 'Second Timers' along with those planning higher risk actions -- such as hanging banners or planting grave markers on the base. In 2000 about 10,000 people attended the demonstration, 3,600 crossed the line, and of those, 2,100 were given 'ban and bar letters warning them not to return. 26 were put on trial, their sentenced ranged from probation to 6 months in federal prison.

After 9/11 (2001) a fence was built around Fort Benning and it was no longer possible for large numbers to walk down the road onto the base. That year 31 were arrested for blocking traffic.

In 2002 three hour nonviolence training sessions were offered for an increasing numbers of people coming to Columbus early to participate in weekend workshops. That year there was a particular struggle prior to the action because the city police set up checkpoints to search demonstrators and their bags. Nonviolence trainings included role plays to prepare people to deal with the process, which included stating “I do not consent to this search.”

A year later, a week before the SOAW demonstration, Miami police attacked 'anti-globalisation' protesters, injuring dozens. Many groups attending Miami planned to come to the SOAW protest for the first time. When SOAW lawyers challenged the legality of police searches of protesters, the police convince the judge that this was necessary as so many 'anarchists? were coming from the Miami protests. So as people went to the vigil, we distributed armbands with the anarchist symbol – a great sight to see thousands of people, from college students to grey-haired Catholic nuns wearing the anarchist symbol on Fort Benning road. The searches were later ruled unconstitutional and discontinued before the 2004 demonstrations.

Some training participants in 2003 were afraid of those who were coming from Miami, blaming them for the violence with the police and fearing the same in Georgia. This gave the opportunity to discuss police tactics and the real story, and to help people deal with their fears though role playing and discussion. On the other hand, some of the Miami demonstrators were surprised the police did not attack the SOA demonstrators: from their experience of anti-globalisation demonstrations, they thought police violence was inevitable. They had never participated in a demonstration with nonviolent guidelines and a history of nonviolence.

The 2004 Sunday vigil was attended by 16,000, while in 2006 the numbers reached 20,000. This growth is a result of organizing. Fr. Roy speaks around the country and several videos about SOA are being shown. Work has been done to develop allies from unions, Veterans for Peace, colleges, community and religious groups who organise vans, buses and planes to bring people to the weekend of events.

The Role of Trainings

Over the seven years we've been doing the Friday nonviolence trainings, we've had to take into consideration a number of situations. The police have set up fences, increasingly restricting access to adjacent property. One year Fort Benning blasted “patriotic” music at us, attempting to drown out the speeches and music from our stage. “God Bless Fort Benning Day” has become a counter-event which has also grown over the past years. Fort Benning has also become a major base for soldiers going to and returning from Iraq, raising local people's opposition to the presence of demonstrators. 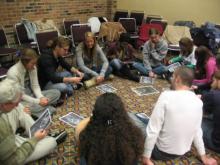 Since lots of new folks are coming, the Introductory Nonviolence Training is for people who are new to large demonstrations such as this and who have never participated in a nonviolence training. The agenda includes an exploration of what is meant by nonviolence and nonviolent actions, how we can prepare ourselves to maintain our commitment to nonviolence, an overview of the scenario for the legal action, knowing our rights and understanding the risks and consequences of nonviolent civil disobedience.

Most of those who attend this training are young people who have never been to a demonstration. This poses certain challenges to the trainers. I realised I was making assumptions while facilitating a hassle line when I asked one side to “be yourself at a demonstration” and was told that none of them had ever been at a demonstration. More preparation was needed. We now begin that process by setting up a potential “hassle” between themselves and someone in their lives who is opposed to them going to the demonstration. We then escalate it from there. It's also a challenge to have only 3 hours with a group that can be 50 or more people, coming with differing needs. Some challenge the very idea of a “hassle”, others fear we are not preparing them for the worst. But over the years we have found that this demonstration is as an entry point to the movement for peace and justice for many, the nonviolence trainings are a helpful foundation.
When we noticed that people were coming back to the introductory training the next year, we added a training on Building Skills that includes learning frameworks for developing nonviolent campaigns, and tools to help groups deepen their analysis, identify their allies, and develop effective nonviolent actions so they can continue their work when they go home. A third training option is being planned for next year.
Trainings also take place to prepare people for roles such as Peacekeepers and Legal Observers. For those who engage in civil disobedience, sentences have been from 3 to 6 months. Therefore a strong support system has been created for those considering that risk ,to help them through the discernment process and during and after their time as prisoners.

Nonviolence training and good campaign strategies, along with grassroots organizing, can develop the people power to create a climate and culture that will make the existence of institutions like the SOA/WHINSEC impossible.