Military bases: the footprint of war ... 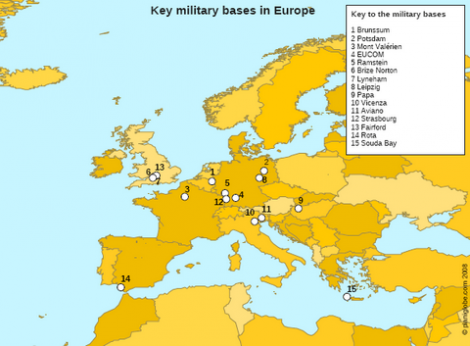 ... and target for nonviolent direct action

Europe is at war. The bombs are not falling in Europe, but several thousand kilometers away in Iraq and Afghanistan. Nevertheless war is waged from Europe. From a whole range of military bases in Europe planes take off and supplies are shipped or air lifted to fight those wars.

The Iraq war made this very visible, when the US waged war from its European bases together with British military forces. In 2003, 54,000 US military based in Europe were deployed, or were active in direct support of the war, against Iraq. There was 320,000 tons of military material shipped from Europe to the war zone in the Persian Gulf. The US Army had 26,000 European-based soldiers deployed, mainly from bases in Germany and Italy. Bombing flights over Iraq by the US and UK air forces were continually taking off from British bases like Fairford, while 3000 combat sorties were flown from the aircraft carriers of the US 6th Fleet in the Mediterranean. Marines were inserted into northern Iraq from Souda Bay marine base in Crete.

And this is still going on. In 2006, two-thirds of the US Army personnel in Europe were deployed to Iraq or Afghanistan, preparing to deploy, or just returned; 75% of the military equipment used by the US military in these wars passes through Europe.

Meanwhile, through NATO, other European countries are also heavily engaged in the Afghanistan war. About 25,000 European military participate in the so-called International Security Assistance Force (ISAF), making up nearly 50% of this force. Through the EU these countries set up their own interventions, like in Congo or Chad. During the last 10 years they have transformed their forces into intervention armies. They have developed the capacity to deploy their forces far from their own territory. Local military bases now house military units trained in military occupations elsewhere, and all European countries have individually or collectively developed their own infrastructure for long-distance deployment and command.

Very important for military intervention is the sea- and airlift infrastructure. Military bases function as hubs in a wide transport network in order to move troops and material into the combat zones.

An important example is the biggest air base in Europe: Ramstein (Germany). More than 10,000 US military personnel work on this base. Once an important fighter airbase, it is now a central hub for airlift towards Asia, Africa and the Middle East, for US and NATO forces. This base is operated by the US 86th Airlift Wing and also hosts both the EUCOM air component command as well as one of NATO's. More than 10,000 tons of cargo and about 25,000 passengers pass through Ramstein each month.

European countries operate their own airlift assets at a national level (UK: Brize Norton and Lyneham; Netherlands: Eindhoven; Belgium: Melsbroek; ...) but are also investing in pooled airlift. Through the SALIS project they lease for collective military use 6 Antonov An-124 transport planes, which are based at the civil airport of Leipzig (Germany). Another project is the purchase of three C-17 aircraft, which will be based at the military airport of Papa (Hungary) from November 2008.

For sealift, civil capacities are often used. Most European countries have or no -- or insufficient -- means of military sea transport, so civil shipping is hired. Also, civil ports are used. The US Army uses the ports of Antwerp, Rotterdam and Bremen for its sea transports from and towards its bases in Germany.

The next building block for military interventions are the combat forces, nowadays fewer and with lighter material in order to be more easily deployed to the battle zone. These are spread across a lot of bases all over Europe. NATO aims to have 40% of its land forces ready for deployment and 8% of them continuously in operation, which results in a lot of bases being involved . So we have to limit ourselves to some examples.

Vicenza in northern Italy houses the main part of the US 173rd Airborne Brigade in the Ederle barracks; 2900 military. There are plans to concentrate the whole brigade in Vicenza and to build a new base on the Dal Molin civilian airfield. This would raise the US military presence to 5000 soldiers. The 173rd AB is one of the three main US combat brigades destined to remain based in Europe. In 2003, 1000 soldiers from this brigade did a parachute jump into northern Iraq, taking off from Aviano military airport (Italy). Later this brigade deployed to Afghanistan as well. The new base enlargement would make Vicenza one of the main military intervention bases in Europe, a prospect which provoked demonstrations of more than 100,000 people.

An example of European combat forces is the Eurocorps based in Strasbourg. This is a headquarters for land forces, originally formed by France and Germany and later joined by Belgium, Spain, Luxembourg and Poland. It permanently has about 1000 personnel, and national forces are earmarked for operations under this command. The Eurocorps can be used for EU and NATO operations, and it was used in Kosovo and Afghanistan.

One brigade is permanently earmarked for this headquarters: the French-German Brigade. This brigade is a major army unit with about 5000 soldiers coming from both countries. It is based at several places in the German region of Baden-Württemberg. This brigade was deployed together with the Eurocorps HQ to Kosovo and Afghanistan.

Not only land forces are involved in interventions. Fighter planes based in Europe are often deployed to Afghanistan to give close air support for the land troops, in other words bombing. And sometimes the bombing flights take off directly from European bases: during the last Iraq war from Fairford (Britain), in 1991 also from Rota (Spain), in the Kosovo war from Italian bases.

These are just a few examples of the footprint of war in Europe, as 1000 military bases are impossible to describe in 1000 words.

The Eurocorps can be used for EU and NATO operations, and it was used in Kosovo and Afghanistan.