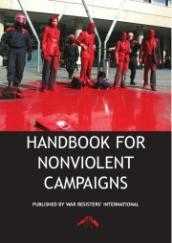 In February 2009 WRI will launch its latest publication the “Handbook for Nonviolent Campaigns”.

WRI has often been asked for material on nonviolence training, or for introductory workshops. And finally decided it was time to produce its own training resource, where we could present an approach to nonviolence based on participatory forms of organising and reflecting what has been learnt from years of international work.

This handbook is envisaged as an introductory resource, though a number of the texts go beyond an introductory level. The idea is that groups starting to work in nonviolence can be inspired from what other groups have done in different parts of the world, learning from the rich history of the nonviolence movement.

The Handbook includes sections on how to plan strategic nonviolent campaigns, how to prepare for nonviolent actions, tools for working in groups, the connection between gender and nonviolence, a series of stories from the work in nonviolence from groups all over the world, a long list of practical training exercises, and a list of related resources. A number of these resources were 'road-tested' in early October when the WRI Nonviolence Programme conducted a nonviolence training with Irish activists, hosted by WRI's affiliate INNATE. We plan for these resources to be used by grassroots groups around the world,.

One of the main challenge for an international organisation is how to produce resources that can manifest its international nature. In this handbook we have tried to incorporate how people work on nonviolence in different contexts, yet still we recognise an Anglo-American dominance. So this handbook is a resource to be adapted to your own context. That is why it has a section Do it Yourself, giving tips on how to produce your own resource.

This handbook was produced in a Wiki - a web system for collaborative editing. It has two version a printed and a web one. We hope to regularly update de web version, which will continue to exist in a Wiki format. You can go on to http://wri-irg.org/node/3855 and make your own posting.  Therefore adaptations of parts of the handbook or variations on particular exercises can still appear there. For WRI what is more important is that the handbook gets used and gets to the streets, so please help us promoting it and distributing it. Please go to the webshop at http://wri-irg.org/node/8410 if you want copies of the Handbook for Nonviolent Campaigns.