Dealing with gender in training in nonviolence

This article is the result of material published in the Handbook for Nonviolent Campaigns and a session on gender and nonviolence at WRI's International Nonviolence Training Exchange, in Bilbao in October 2008.

It may seem simple and obvious that we want both men and women involved in our struggles against war and injustice. However, if we want to fully utilise people's talents, energy, and insights, we need to apply gender awareness to how we organise ourselves, how we design our campaigns, and how we conduct our trainings for action.

Why? Because gender, our societies' definitions of male and female roles, of masculinity and femininity, influences all of us. And the social traditions that have constructed masculinity as dominant, aggressive, and controlling and femininity as weak, submissive, and serving have deeply affected each of us. Gender awareness helps us to make sure that in our nonviolent actions and campaigns, we don't perpetuate the same injustices we are trying to stop.

In antimilitarist campaigns, gender awareness and gender-based analysis are also valuable tools for creating an effective strategy. Gender is an element in every conflict. It may not be the immediate cause of a conflict, but different ideas of masculinity and femininity are at the heart of why and how people fight. Military systems are built to function on certain ideas and assumptions about male and female roles. To create nonviolent structures and systems for resolving conflict, we will need to create new assumptions and expectations about gender.

Why should peace movements deal with the issue of gender violence?

A gender perspective gives important insights into the work for peace and justice. Ideas about masculinity and femininity lie at the roots of violence and are used to support armed conflicts. The level of violence against women and girls in peacetime is an important indicator about how just and peaceful a society really is. Peace and justice organisations that want to end the violence of war will be more effective if they understand the full spectrum of violence in their society and challenge it. 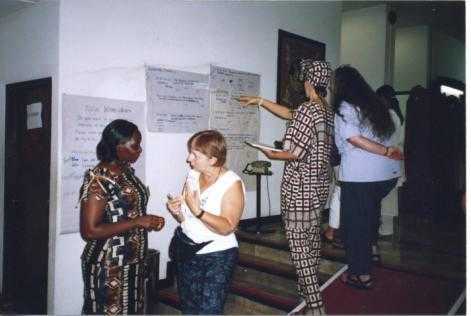 Survivors of gender violence during war know that reconciliation is impossible without gender justice. The silence around sexual violence against men and boys during war must also be broken. Peace movements cannot ignore issues related to gender and war, such as the increased militarisation of women, the skills and leadership that women and girls could bring to peace-building, and how gender expectations encourage men to fight.

Why is a gender perspective important in our work?

People who work for social change often assume that we are free from internalised assumptions about gender and thus do not need to learn and change ourselves. Creating awareness and changing ourselves and the dynamics within our organisations on gender issues is an important personal and organisational transformation that in itself acts to dismantle structural violence in the society.

It is difficult to work on gender issues because it is about everyone of us, and we cannot avoid it. Because we are directly affected, we often face fear when the issue is raised. We don't know how to deal with it or don't want to, and we are afraid of more conflict and division. Often it is easier to say that this is not our priority. To encourage ourselves, we can look for examples where other groups and movements have begun to raise these questions.

Why should gender be a part of nonviolence training?

Because women are half of every community and the tasks of peacebuilding are so great, women and men must be partners in the process of peacebuilding and nonviolence struggle.
Because sexism, racism, class ism, ethnic and religious discrimination originate from the same set of beliefs that some people are inherently ”better” than others, women’s empowerment should be seen as inherent to the process of building peace. Like other social structures that set up some people as superior to others, the sexist belief that women's lives are less valuable than men's lives leads to violence against women. When women engage in peacebuilding, they often challenge these sexist beliefs along with other structures that discriminate against people.
Because women are the central caretakers of families in many cultures, everyone suffers when women are oppressed, victimised, and excluded from peacebuilding. Their centrality to communal life makes their inclusion in peacebuilding essential.
Because women have the capacity for both violence and peace, women must be encouraged to use their gifts in building peace.
Because women many times are excluded from public decision-making, leadership, and educational opportunities in many communities around the world, it is important to create special training to empower women to use their gifts in the tasks of building peace.
Because women and men have different experiences of violence and peace, women must be allowed and encouraged to bring their unique insights and gifts to the process of peacebuilding.
Because women have proved all over the world that they are successful peacebuilders, more women need to be encouraged to become involved in peacebuilding processes as stipulated by the United Nation’s Security Council Resolution 1325.

Names of famous people 10/10 categories
Ask people in a group to offer names for statues in a new park that is huge and will have many important famous people. Politicians, musicians, films actors, etc. Then look at gender balance.

Family dinner
Divide into small groups of 5-6 people. The groups are asked to give a scene from their childhood where all the family members were present. Make a drawing of the scene, where everybody is in the room, what is everyone doing, who has the control. After sharing the scenes, create a discussion on the different roles that different genders played in the scene. Follow up the discussion on de-militarising those scenes.

Messages on being the "right" men / women
Divide the group into men and women, ask them to write in a box all the messages they get from society about how to be a man or how to be a woman. Each group then is asked to write all the names they will be called if they won't be men and women as they should and also the list of names they will be called if you want to "get out of the box". It is followed up in a discussion about the feelings that came up while writing

The dark room
Possible when you know each other well inside the group. You cover your eyes and choose someone without knowing who it is and give that person a massage all over the body. You switch couples. In the end you talk about not knowing if you are giving the massage to men / women and how did it make you feel, about pleasure and sexuality.

Keep track by speaker/statement
During a meeting one person takes notes on who is talking and what kind of statements is. If a statement is giving an answer or if they are questions and reflections. At the end read it out and try to understand the power structure inside the group.

Fish bowl
A group divides into men and women and have a separate conversation, give them the topic of how gender affects them in their activism. After that do a fish-bowl discussion when one side is talking and the others can only listen. Note what are the difference and similarities between both groups.

Short film - Socio-drama
Show part of a short film. Stopping it in the middle and playing out what we think the end is going to be. After that watch the end of the film and discuss why do we assumed a specific ending in association to gender roles.

Statues
A man and a woman are being seated in different positions one being in control and the other submissive. The group says what it looks like. What are they thinking, why standing/sitting like that?
Than they switch positions and the group is being asked again. 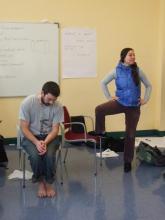 Bus
Put up chairs as if in a bus and ask people to sit. See the differences between men and women. Then ask people to try and act as the opposite gender