Colombia: New round of arbitrary recruitment

WRI's Colombian affiliate Red Juvenil reported a new round of
arbitrary recruitment in Medellin in October and November 2008.
'Batidas', the recruiting of youth on the street or public places if
they cannot show the right military papers, have been observed in
various places of Medellin, among others the main transport terminal in
the north of Medellin, several metro stations, the football stadium of
Medellin, and in several poorer neighbourhoods of the city (Comunas 2,
5, 6, 13). In several cases, the military kept the identity cards of
youth and demanded that they reclaim them back from the military
barracks.

In May 2008, the United Nations Working Group on Arbitrary Detention
said in an opinion on cases of recruitment in Colombia that "neither
does the practice of 'batidas', raids, or 'levas' with the aim to
detain youth who cannot confirm their military situation in the streets
or public spaces a legal basis or juridical substance." The Working
Group therefore declared in the three cases before it that "the
deprivation of liberty of which Mr Estrada Marin, Giraldo Hincapie and
Gonzales Duque were victims was arbitrary, and in contravention of
article 9 of the International Covenant on Civil and Political Rights."

In addition to the general illegality of the 'batidas', Red Juvenil
observed a range of irregularities, such as: 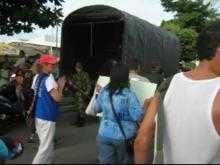 On the request of Red Juvenil, War Resisters'
International acted in two cases of recruitment and sent letters to the
Colombian Ministry of Defence, complaining about their illegal
recruitment. So far, a reply on the issue is outstanding.

The conscientious objection group Quinto Mandamiento from
Barrancabermeja recently released a video on recruitment in
Barrancabermeja on Youtube. This video gives an impression of the
practice of recruitment and the impact this practice has on young
people. The video is available (in Spanish) at http://es.youtube.com/watch?v=yB5caRsO2QA.