In the early weeks of 2008, Colombia experienced a wave of "batidas" - raids on youth on public places such as bus stations in order to recruit draft evaders or anyone without the appropriate military papers to the military. While this is the common form of recruitment in Colombia, there are indications that the level of batidas in the province of Antioquia was unusual.

"On 5 January at 5.30pm a squadron of the fourth brigade was present in the neighbourhood of Raizal, at the corner of calle 77 and calle 31.

They began to stop motorbikes, bicycles, and any youth who happened to be walking on the street ... they did not arrive as they did in the past on lorries, and taking men of buses, but this time they arrived on foot, without calling for attention ... they went in small groups, walking through the streets of the neighbourhood. They then put the young people on the sandy ground, the young between 16 and 20 years who they said had to define their military situation. [...]"

This is almost the usual procedure. The young are then brought on lorries to military barracks, where they will quickly be checked, and most will be recruited - unless they are obviously unfit for military service or carry papers with them that prove that they are studying, or exempt for other reasons. Although this might not always be sufficient.

Red Juvenil received similar reports from other parts of Medellin, and from Barrancabermeja, throughout January and February 2008.

The Colombian military claims that this practice is legal. According to Article 50 of degree 2048, the recruitment authorities have the right to carry out patrols to find draft evaders and/or persons who did not define their military situation. While - according to the degree - it might be legal to check people's papers, what usually follows is certainly illegal, and does not meet neither Colombian nor international legal standards. According to the law, those who do not define their military situation in time can be compelled to do so. However, the practice of taking those without military ID to the barracks to process them there directly deprives those youth of their right to a proper legal process, as they have almost no chance to claim legal exemptions, to submit any prove or other papers supporting their right to exemption, and so on. That this kind of process is illegal has also been stressed by the Inter-American Commission on Human Rights in a decision on a case from Guatemala in 1993.

Another general practice shows that the military in fact is aware of the illegality of its recruitment. War Resisters' International knows from several cases that those recruited in this way are forced to sign up to three documents without being given the chance to read them (see for example the case of Carlos Andres Giraldo Hincapie), i.e. that there are no reasons for exemption according to article 28 of law 48/1999. With these signatures the military tries to cover itself against accusations of forced or illegal recruitment. 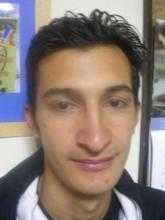 "I, Alvaro, I declare myself conscientious objector, being conscientious that war will only end if many of us realise that through violence we won't reach peace or a healthy and tolerant coexistence. I declare myself an objector against any kind of oppression or human rights violation, and to be part of any kind of army, legal or illegal and being very clear that I wont take arms as a way of solving conflicts and that from today on I will work so that military service is no longer compulsory and that the military card wont be needed for any requirement. This position is not only for my own personal convenience, as I think about how many families and people could be fed and have their basic needs covered with what is spent only on one day of war. In addition I have experienced the senseless repression of the police."

Although he had declared himself a conscientious objector, the Colombian military maintained in its response to Pena's petition that there is no right to conscientious objection in Colombia, and that Pena would need to present himself on 12 February in order to define his military situation.

On that day, Alvaro Pena presented himself. The Bogota CO group reported on the events: "Álvaro Peña, colombian conscientious objector, was today February 12th at 9 am in the Villa de los Alpes´ Coliseum, to resolve his military situation. During the whole day, as part of millions of young men summoned by the military forces, Álvaro, tried to explain his case as a conscientious objector to the Major Dueñas, who was in charge of incorporation. Alvaró was rejected several times, and never listened to.

Finally, Álvaro was taken with 200 other young men, who had not resolved their military situation, into a closed room, where they remained until 9:30 p.m. when they were told that they must be there tomorrow again at 7:00 a.m."

On the next day, Pena again presented himself. After several hours, the military postponed his service, and ordered him to return on 20 May to "define his military situation".