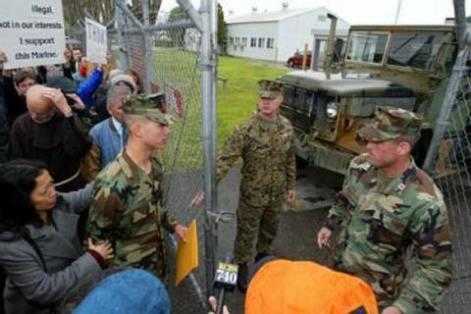 Stephen Funk was one of the first resisters who went to prison for his conscientious objection to the war in Iraq in 2003, serving six months. For The Broken Rifle, he tells his story.

I joined the United States Marine Corps when I was 19 years old. I was looking for adventure, for a sense of purpose, and for a sense of belonging. I had no idea what I was getting myself into. When I entered Basic Training and was forced to be violent, shout "kill, kill, kill!" constantly, shoot human shape targets, and stab human shaped sandbags, I knew I had made a grave mistake by enlisting in the military. Unfortunately, like most people who enter a military contract, I had not seriously asked myself the questions military recruiters will never ask. Why does war exist? Is war justifiable? Could I kill another human being?

When I discovered I was a conscientious objector I didn't know that I had any rights to act on those beliefs. Military indoctrination leads one to think that their own beliefs are insignificant and selfish, and that no enlisted personnel have the power or the right to act as individuals. While in rifle training I happened to qualify as an expert rifleman. Instead of congratulating me, my instructor told me that in a real situation I wouldn't have "scored" so well. At first I was angry, after all I had excelled at what was asked of me, but then I thought about what he had said and realized he was right. I told him that he was right, that I would not "score" as well in a real situation, because I believe that killing is wrong. Although it may seem insignificant, stating out loud what had been repressed throughout my training, that I am a pacifist, had an amazing effect. It was if I had been holding my breath underwater the entire time and I had finally surfaced for fresh air.

In late 2002 I lived in San Francisco and spent one weekend a month as a Marine reservist. The rest of the time I spent marching in the streets to protest the invasion of Iraq, and to work on my application for conscientious objection. With support from other activists I organized a press conference in April of 2003 to declare myself a conscientious objector. I was among the earliest applicants for conscientious objector status in this war and the very first to go public with my beliefs. I went public because it was the right thing to do; I was able to go public because of all the support I was receiving from the peace community.

With continued support I began a public campaign to let others in military service know that they have the right and the duty to disobey unlawful and immoral orders. The military wanted to silence my voice and sought to make an example out of me. In September 2003 I was brought before a military court martial. I was sentenced to six months in military prison, my military rank was reduced to Private, and I was given a Bad-Conduct Discharge.

I went to prison proud of what I had accomplished, but sad that I was being incarcerated for speaking out for peace. While I was imprisoned the antiwar movement marched on without me but I continued to receive support from people who had heard about my story. I received thousands of letters from people all around the world who supported my act of peaceful resistance. The continued support meant so much to me, it meant I had not been imprisoned for no reason, it meant that others were out there and were working for a peaceful world.

I was released in 2004 and continue to work for peace and justice. I work with various organizations including Iraq Veterans Against the War, Veterans for Peace, and Vets4Vets. I transferred to Stanford University last fall and have declared a major in International Relations.

May 15th is International Conscientious Objectors' Day. It is a time to celebrate the victories made by CO's such as the recent release of Mehmet Tarhan of Turkey, as well as the progress of the peace movement. It is also a time to renew support for those who are continuing to struggle in their work for peace. Most recently, Flight Lieutenant Dr Malcolm Kendall-Smith was imprisoned for his refusal to serve. In the U.S. Kevin Benderman is serving a prison sentence and the military is threatening action against Katherine Jashinsky for her public resistance. These men and women, and others who are being persecuted in the quest for peace, deserve and need our support.