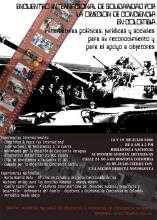 From 18-20 July 2006, the International Meeting on Solidarity with Conscientious Objectors in Colombia took place in Bogota.

The opening speech was given by WRI's Right to Refuse to Kill staff person Andreas Speck, who provided a general panorama on conscientious objection in the world, setting the framework for the meeting. This was followed by a presentation by Carlos Gutiérrez Carvajal on conscientious objection in Colombia, its history, development, organisational processes and proposals for the future.

Participants of the conference came from several regions of Colombia - including Bogota, Medellin, Cauca, Arauca, Villa Rica - and from Ecuador, Paraguay, Serbia, Spain, the United States, plus War Resisters' International and Conscience and Peace Tax International as international organisations. 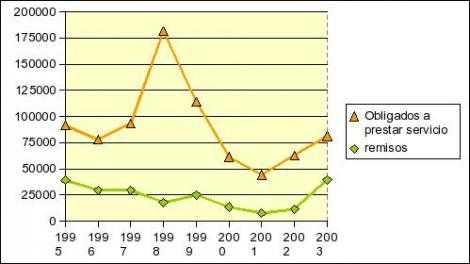 The graphic on the right shows that draft avoidance is a widespread phenomenon in Colombia - reaching around 45% in 2003. However, open conscientious objection is relatively low, and not covered by any statistics. A major problem for draft evaders and conscientious objectors alike is the lack of a military ID card, which is needed for many basic things in Colombian society: studying and graduating from university, applying for a job or driving license, etc. Besides fear of arrest and persecution (or forced recruitment by the militia or guerrilla), the impossibility to live a normal life makes conscientious objection and difficult choice, especially in a country where unemployment is high, and 'enlisting' in any of the armed forces can also be seen as a way of survival.

The international meeting developed several ideas for closer cooperation and international protection strategies, which will require further discussion and development before implementation. In September, a national assembly of Colombian conscientious objectors will decide about the next steps of the Colombian CO movement.