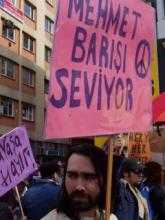 Turkish conscientious objector Mehmet Tarhan is fast approaching the completion of the fifth week of his hunger strike (see CO-Update No 14, October 2005). Mehmet Tarhan began this second hunger strike after a new incident of maltreatment and abuse. According to reports received by the WRI office, on 30 September, at about 3pm, Mehmet Tarhan was told by non-commissioned military prison officer Hilmi Savluk, who was accompanied by 3-4 guards, that they were to cut Mehmet's hair. It took 7-8 people to restrain Mehmet and to cut his hair and beard against his will, using force. As a result, Mehmet Tarhan is suffering from pain in his face, both hands, in his left arm and left foot, and has bruises on arms and legs. He is unable to turn his neck because of pain in his neck and face. In protest against this treatment, Mehmet Tarhan again went on hunger strike.

Mehmet Tarhan was sentenced to 4 years imprisonment on 10 August 2005, on two charges of "insubordination in front of his unit". He received a sentence of two years imprisonment for each of the charges. He had been arrest in Izmir on 8 April 2005.

Tarhan had been on hunger strike from 25 May to 21 June 2005, to protest against maltreatment and the authorities inability to protect him in prison. He ended his hunger strike after 28 days, after the prison authorities accepted his demands (see TK14724-220605). Tarhan had been briefly released from military prison following a trial session on 9 June 2005 (see TK14724-220605), but had been brought back to his military unit, where he was again given a military order, which he refused. This lead to the second charge, and a second trial on 12 July, where the decision was taken to join the two cases, which resulted in the sentence on 10 August 2005.

Supporters of Mehmet Tarhan now fear for his health, and urgent interventions are needed. War Resisters' International therefore requests protest letters, faxes, and emails to the Turkish authorities, as a matter of urgency.

A protest email to the Turkish President Ahmet Nezdet Secer can be sent at wri-irg.org/co/alerts/20051003a.html