The securitisation of aid in Iraq and the failure to be guided by humanity, neutrality and impartiality

The United Nations Office for the Coordination of Humanitarian Assistance (UNOCHA) sets out four clear humanitarian principles by which aid should be delivered: humanity; neutrality; impartiality and operational independence.1 These foundation stones were set out in General Assembly resolution 46/182 passed in December 1991.2 These principles are still cited today by OCHA but the nature of recent conflicts and the actions of UN Agencies and of OCHA itself seem directly to undermine the very principles by which OCHA claims to act. Perhaps it was always ambitious to expect global agencies reliant on the membership of nation states to be able to act impartially or independently. That same General Assembly resolution after all also states clearly that “humanitarian assistance should be provided with the consent of the affected country and in principle on the basis of an appeal by the affected country”.3 When the state itself is party to the conflict, as in Syria there are clear limits to such an approach.

There is also a legitimate question about whether aid can ever be delivered neutrally in conflict where at the very least humanitarian agencies will have to negotiate with many different warring factions in order to be able to deliver assistance. The ICRC (International Committee of the Red Cross) and indeed OCHA itself use examples of just such multiple negotiations to demonstrate their neutrality but there are few organisations with such capacity.4 For many decades humanitarian actors have taken sides and failed that implicit test of neutrality often for good reas

on (aid to Eritrean and Tigrayan rebels throughout the Ethiopian civil war is a good example). Two things have explicitly changed, however, since the invasions of Afghanistan and Iraq: the direct delivery of aid by the military has returned the recipient to a colonial type relationship and the continued securitisation of aid limits both access and effectiveness.

In Afghanistan and Iraq, the justifications for invasion and the testimonies of participating soldiers make clear that missions quickly changed into situations where soldiers believed they were on a humanitarian mission to help bring economic development in the case of Afghanistan or democracy in the case of Iraq. Others have argued that the creation of reconstruction teams in Afghanistan has left little legacy and failed to give space to non-military development agencies to build relationships and provide a longer term commitment.5 The reconstruction teams were associated with the political and military goals of the occupiers and not of neutral or impartial development agencies.

The situation is possibly worse in Iraq where the UN agencies depended on the protection of US soldiers until the US military’s official departure from Iraq in 2011. That means that any time any UN official moved in Baghdad and other areas outside Iraqi-Kurdistan they did so only in convoy with US troops. Any visit to local citizens, any delivery of supplies was “facilitated” by US troops. It is clear that after the 2006/7 near civil war in parts of Iraq some kind of protection for humanitarian agencies was necessary but by this time the US had turned into occupiers and so the delivery of aid was by extension tied to a perceived occupation. After US troops left, the UN provided its own security for missions but whilst the mixed nationalities of the UN and the non-aggressive stance of UN soldiers providing protection may f 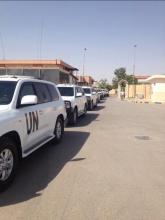 eel different to a UN member of staff: put yourself in the role of a citizen of Fallujah or Ramadi watching an armoured convoy arrive; the logos might be different but the soldiers are still there. It hardly feels neutral or impartial. And now the UN is stuck: protection has become a self-perpetuating necessity. The more you drive around in heavily armed convoys, the more you need to do so, partly because you become an easily identifiable target. The UN has its own peculiar history in Iraq as being associated with the corruption and deprivation of the oil for food sanctions during the nineties it is universally distrusted. But the way to win over trust was arguably not to end up looking like the US army in disguise: whilst the World Food Programme (WFP) and UNICEF remain the few international actors managing to get assistance today through to people in need in Anbar, it is still through that prism of occupation that they will be viewed. International NGOs largely entered Iraq on the backs of the US invasion and although many try hard to adhere to humanitarian principles and move around without the armed protection that UN Agencies demand, they need to work hard to avoid being associated with the occupation.

The situation in Kurdistan is different, partly because of the relative stability there which meant that the UN and other international agencies have better resisted the creeping securitisation of aid. It is possible for UN Agencies to travel around Kurdistan without protection. The consequence is that nearly all the assistance being given today to Iraqis displaced as a result of the growth of the so-called Islamic state is in Iraqi Kurdistan. Latest UN figures suggest that more than 2.6 million people have been displaced in Iraq. Only about half of these are in Kurdistan. There are people in need in areas of conflict in Anbar, Nineveh and Dyala; where is the impartial aid that is reaching them? I would argue that no international actors on the ground in Iraq dare to negotiate access with insurgent forces or even tribal leaders because humanitarian workers are now fully identified with one side of the conflict and the “protection” necessary to operate in areas of conflict accentuates the association with one side.

In Syria it is possible to argue that International NGOs are striving to be impartial: working with a range of actors in both government and rebel held areas; willing to try to get aid through to those in areas controlled by all sorts of groups. The amount of assistance getting through though is very limited and the big UN agencies are thwarted by the limits of working within the confines of a system that demands government approval and often government security.

The militarisation and subsequent securitisation of the delivery of humanitarian and development assistance in Iraq has severely limited the ability of the UN to deliver to those in most need and has undermined the global commitment to impartial aid, independently delivered. In many parts of Iraq it is no longer possible to independently deliver aid. In Syria it is also not possible to independently deliver aid, but by working with a wide range of groups, international NGOs have demonstrated that it is still possible to remain impartial and thus attempt to reach those in most need. Despite the difficulties this is closer to implementing the UN vision of aid delivered independently and guided by humanity, neutrality and impartiality than the UN itself. It also usefully demonstrates that by working through local actors it is still possible to encourage and adhere to humanitarian principles. All humanitarian organisations should continue to resist the securitisation of aid if at all possible.

5 Beckwith, Sam, The Militarisation of Aid in Afghanistan: Implications for Humanitarian Actors and the Way Ahead (April 30, 2012). Available at SSRN http://papers.ssrn.com/sol3/papers.cfm?abstract_id=2167857