Reflections from Stopping the War Business

At the end of the Stopping the War Business international seminar, three participants shared their reflections from the meeting. Here they are below. 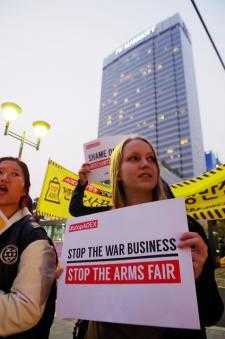 It's good to be in South Korea. I'm from a country which still maintains conscription and I've used half of my life working with issues related to conscientious objection. That is one reason why it feels so special to be in Seoul, as I've heard so much about the campaings that our South Korean friends have been doing here.

Anyway, war profiteering is not the strongest area of my knowledge so I've learned a lot during this seminar. Thanks for the really interesting keynote speakers as well as workshops!

One thing that really struck me during the seminar was the feeling of internationality. We, antimilitarist activists from many continents, had come togeher to share experiences of a struggle against war profiteering, to share inspiration and skills. And we did more that that: we shared connections and thoughts on how tho make the movement stronger by taking our campaigns to an even more international level.

I was asked to tell what I'll take home from here. To conclude, the list is simple: I will take home a little bit wider understanding, ideas for common action, solidarity, and – once again – hope.

Let’s be creative in our resistance and solidarity work

Denma from World Without War

South Korea has the world’s 10th biggest military expenditure and is the 9th biggest importer of weapons. World Without War have been thinking for a long time about how we can work effectively against the war business in a situation like Korea where the arms trade is one of the major industries. The international seminar on war profiteering was meaningful in that we could explore effective ways to challenge those businesses together. The seminar was participatory rather than just a panel discussion, which is to be lauded. Sometimes we became rather serious - and understandably so, when we realized just how big the war business is - but then again we managed a smile especially when we took to the floor with the protest dance from the campaign against the naval base in Gangjeong village, Jeju Island. I learned many new things. I could understand more about the current situation on arms trade worldwide, who profit from wars, and the struggle all around the world against greed in its myriad forms.

Jordi from Spain told us how capitalism and militarism help grow and feed off of each other. Lexys from Venezuela added an ‘environmental perspective’ to that. In Korea the military's needs always supersede and win out over environmental concerns. The new naval base on Jeju Island is a clear example of this. ‘Militarization of the police’ that Tara from the US presented was also very interesting. I was unaware of there being an exhibition for police equipment and their expo was uncannily similar to the military’s also. Andrew from South Africa who was unable to come to Korea because of ill health kindly agreed to have a Skype conference despite the terrible time difference. He pointed out that the arms trade is astonishingly under-regulated because it’s so secretive so susceptible to corruption with no political oversight or regulation. Therefore, it’s up to us to make changes.

After the seminar, we prepared our action together to demonstrate our strong dissent to the arms dealers. We chanted and carried placards together at the JW Marriot hotel where merchants of death had their fancy dinner. We visited the ADEX exhibition to disturb their dirty business deals and met a lot of people who came to the exhibition to see the cool airshow during the public days. We were inspired by our fellow activists from around the world and the strength of international solidarity in action was on display for everyone to see. Our resistance was further strengthened and greatly developed as a result of the seminar and actions. I believe it’s not just me or the other Korean activists but also the international participants who were empowered by the seminar and actions we conducted together - we have much to learn from each other. It was a very successful and invigorating event and I hope we can all get together soon. 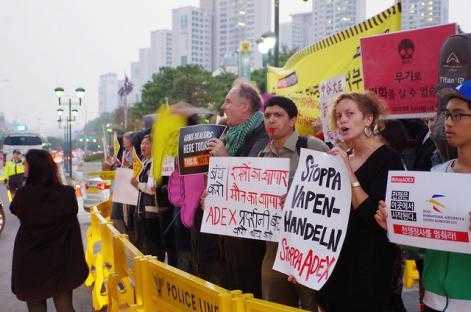 The two day WRI seminar on War Profiteering – Stopping the War Business: Talking tactics & Linking methods was very insightful and important from the perspective of what we in India are working on. In India we have been resisting the Corporate-driven development and monopolization of Rights over Natural resources from Community ownership to corporate ownership.

The state, in order to facilitate the process, has always resorted to various way and means to suppress peoples' resistance. The state is making more sophisticated it's means and machinery to suppress the public will. The Police – law & order machinery is the one which is being heavily armed in the name of increasing public security threats, but are mainly used to threaten the public. The sharing from Jordi Calvo was important because India is one of the leading importers of arms in recent times, and Lexys' stories were similar to what is happening in India in the Mineral rich areas, where private armies are armed by the state to suppress the voice of indigenious population.
Also the experience of Tara Tabissi about special units in the name of counter terrorism, which is seen in India with the state slowly arming the police and in turn the police guns pointing towards resisting masses. The experience of Bahrain and their successful protest sets an encouraging example of campaigning.
It is also notable that the state not only uses this argument of an Internal Security threat, but also is allocating huge funds for arms and artilleries citing external threats with neighboring nations. Thus instead of investing on improving relations with neighbors, the funds for public welfare are dried out in favor of security threats.
All the experience sharing of the war business that is entering in the public life is really eye-opening, seeing how the arms lobby is trying to pass through all the borders to extend their profits.
The campaigns clinic also gave an opportunity to share and reflect upon our own campaign in India, and know in depth about other campaigns.
The WRI seminar was very useful that it helps relate to the struggles and unfolding trends in my own country. I would like thank all the speakers and WRI for wonderful organizing.
The ADEX protest was rejuvenating, the energy of the south Korean friends was contagious and effective.
Programmes & Projects
War Profiteers WRI event Front Page Conference
Theme
WRI activists War starts here Mercenaries arms trade