In July and August this year the War Resisters' International network gathered in Bogota, Colombia. Over 150 antimilitarist activists and conscientious objectors from 40 different countries met at our Antimilitarism in Movement conference, to share experiences, build solidarity, and develop new strategies to resist militarism around the world.

We organised the event alongside our friends and allies in Colombia and Red Antimilitarista de America Latina y el Caribe (RAMALC, the Latin American and Caribbean Antimilitarist Network), who facilitated powerful conversations and organised an inspiring street action. We were also very happy to welcome a number of new affiliates to our network, including groups from West Papua, Colombia, Iceland, USA and Ambazonia.

The Antimilitarism in Movement conference has inspired a range of new projects, publications and events that we will be embarking on over the coming year, including:

Following the conference,  RAMALC  also organised an action in the border of Colombia and Venezuela, highlighting the militarisation of borders and showing solidarity with Venezuelan refugees.

We are also excited to announce that in 2020 we will be returning to printing our Broken Rifle magazine! The Broken Rifle is a magazine published two to three times a year, exploring experience of antimilitarism around the world. This year, we released two editions of the Broken Rifle. The December edition, Antimilitarism in Movement, includes contributions from across the world who joined our conference in Colombia, reflecting on the nature of militarism in their country and - of course - how it is being resisted. The previous edition, Countering the Militarisation of Youth, includes pieces on youth militarisation and examples of resistance to it from different countries.

On this International Conscientious Objection Day (15th May), we shared a powerful statement by Colombian conscientious objectors (COs) which was translated into different languages by WRI members and shared widely within our international network during the week of 15th May. Meanwhile, our network took actions and organised events in support of COs across different countries.

Early this year, we released a call for support for COs in Greece, where we had significant developments for COs in 2019. In coordination with groups in Honduras, we also supported attempts to stop the reintroduction of conscription in Honduras.

Just a few weeks ago on Prisoners for Peace day, we published the names of some of those in prison for their work for peace, and people all around the world wrote letters to those in jail. This year, we've also continued to share news from conscientious objectors around the world in our CO-Update and support individual COs imprisoned via our CO-Alert system, which allows members of our network to quickly demand the release of imprisoned objectors (you can sign up here: www.wri-irg.org/subscribe). 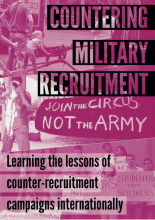 Young people become embroiled in war and militarism all over the world, and militaries are increasingly targeting young people in their recruitment campaigns. We

recently published a new booklet, Countering Military Recruitment, with contributions from counter-recruitment activists around the world, exploring the diverse ways our movements are trying to limit the militaries access to young people.

This publication, and a range of other books, pamphlets and other merchandise are available on our website here: www.shop.wri-irg.org

This year, we also organised the sixth annual International Week of Action Against the Militarisation of Youth, with the events organised by the members of our network. We have already started the planning of the seventh annual week of action and will soon be sharing updates on our website. Contact us via cmoy@wri-irg.org if you'd like to be get involved in the planning.

Empowering Nonviolence is a website we built in 2017 to hold all of our nonviolence resources - it is available in lots of languages and has material on strategic campaigning, effective actions, and training exercises. In 2019, we've published lots of new material, including case studies from different countries, as well as pieces on how to take nonviolent actions such as intervening in corporate events and tips and tricks for researching the arms industry.

Many thanks to all of your support this year! In 2020, we will be sustaining and building our ongoing projects including building solidarity for conscientious objectors, exposing the arms companies profiting from war and violence, and resourcing our movements with trainings, books, and online publications.

The best way to stay in touch with us about these events is by signing up to receive our email updates here: www.wri-irg.org/subscribe

We wish you a happy new year!