We're very excited to have recruited a new staff member in Colombia. Natalia García Cortés joined our small team in September, and will be working on our Right to Refuse to Kill Programme from Bogotá. Welcome, Natalia!

On 15th May, International Conscientious Objection Day, we focused on South Korea and the work of our affiliate World Without War, who are waging a campaign to end the imprisonment of conscientious objectors. Members of the WRI network held solidarity actions at Korean embassies around the world. We have also been regularly supporting conscientious objectors in Israel, where a number of young people have been imprisoned for refusing to join the military. Our CO-Alert system allows members of our network to quickly demand the release of imprisoned objectors, and you can sign up here: www.wri-irg.org/subscribe

The fifth annual week of action against youth militarisation took place in November 2018, with actions taking place all over the world, including in Turkey, Colombia, UK, Italy and Greece.

Click here to donate to support our radical antimilitarist organising

4. Nonviolence training for trainers in Seoul 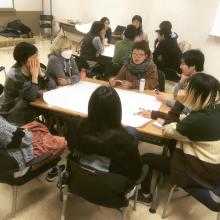 As well as supporting conscientious objectors, World Without War support a network of nonviolence trainers. In December, staff from WRI's Nonviolence Programme traveled to Seoul to run a training for trainers for the network. The training focused on supporting activist organisations in developing strategic campaigns.

The biannual Eurosatory arms fair is a key event in the arms trade calendar - it is one of the largest events of it's kind, with hundreds of companies taking part. To support the grassroots resistance to the fair, we published a short guide to some of the arms companies participating in the fair, detailing the weapons they sell, the places they sell them, and outlining some of the impacts. The guide was distributed to hundreds of activists, journalists, and members of the public by our friends in the Stop Fuelling War coalition.