Conscription was introduced in 1967, shortly after Singapore's separation from Malaysia in 1965. The present legal basis of conscription is the 1967 Law on National Service.

Civil defence is meant to train and organise the population to respond at times of emergency. The civil defence force is a paramilitary force and has units in every constituency. It is 105,000-strong, most of its members being volunteers. In peacetime civil defence force members are trained in such emergency services as fire-fighting and running ambulances, but they also receive military training.3 4 5

All men between the ages of 16 and a half and 50 are liable for military service (in fact, the law does not specify men-only, but the pronouns used in the law are all male, and in practice only men are drafted).6

The length of military service is two years, and two and a half years for those above the rank of corporal.7

Reservist obligations apply until the age of 40, or 50 in the case of officers and those trained in some special occupations. Reserve service involves training and mobilisation exercises for up to 40 days annually. The service may be performed in the civil defence force.8 9 10

There are no clear regulations permitting postponement and exemption. According to sect. 28 of the 1967 law "The proper authority may, by notice, exempt any person from all or any part of that service under the Act" (the term 'proper authority' meaning the military authorities). Regulation 25 of the enlistment regulations prescribed by the 1967 law further sets out the points to be taken into account when considering exemption applications: "(a) the requirements of the defence, economy and education system of Singapore; (b) exceptional hardship of the applicant or members of his household; (c) the extent to which the business responsibilities or interests of the applicant cannot be carried on his absence".13

It is not known just how these considerations are interpreted in practice and how often exemption is granted. Apparently exemption is only granted for medical reasons, for those having a criminal record and for those who can prove their enlistment would be a hardship for their family.14

Compulsory enlistment under the Enlistment Act may not take place before the eighteenth birthday, but voluntarily enlistment can begin any time after registration and fitness examination that occurs at the age of sixteen-and-a-half.

This low age of enlistment is contrary to Article 2 of the Optional Protocol to the Convention on the Rights of the Child on Children in Armed Conflict, which Singapore has ratified. As of 2011, Singapore was one of only eighteen States which legally permitted military recruitment below the age of seventeen years16.

The right to conscientious objection is not legally recognised and there are no provisions for substitute service.17

According to the government: "All male Singaporeans, regardless of race or religion, are expected to do National Service to defend our country. Singapore cannot make exceptions for any group. No Singaporean should be allowed to cite any reason to exempt himself from having to contribute to national defence effort as every Singaporean benefits from the peace and security which National Service has helped to ensure."18

Many Jehovah's Witnesses are known to have refused to perform military service. They are tried in military courts and usually sentenced to 12 or 15 months' military detention. They are then called up again. A second refusal to comply with military orders again results in arrest, charges, and custody pending a second court martial which leads to another two years' detention. This means the total punishment for refusing to perform military service amounts to three years' imprisonment.19 This is in clear breach of the principle of “ne bis in idem” (a person should not be punished repeatedly for the same offence. However, it would appear that in the past some conscientious objectors have been offered postings which were in fact compatible with their objections.20

Singapore has not ratified the International Covenant on Civil and Political Rights (ICCPR), under which this situation would be a clear breach of Article 18. It is however also contrary to Article 18 of the Universal Declaration on Human Rights (UDHR), which Singapore has endorsed.

Under Para 4(2) of the Enlistment Act22, any person failing without lawful excuse to present himself for registration when summoned is liable on conviction to a fine of up to S$10,000 (approximately US $7,000 at 2016 exchange rates) or a term of imprisonment of up to three years, or both. Moreover, the court may order him to present himself for registration on or before a specific date, where after he may incur a further fine increasing at the rate of S$50 (US$35) per day.

There are no known details about how many conscripts fail to respond to the call-up, nor how draft evasion is monitored in practice.

Given the authoritarian nature of the Singaporean state and the harsh punishment of Jehovah's Witnesses, curbing draft evasion is believed to be quite rigorous.

All male citizens and permanent residents aged between 13 years and 40 years (50 years in certain cases) require an exit permit issued by the Armed Forces Council to leave or remain outside Singapore. This is a severe interference with the freedom of movement guaranteed in Article 13 of the Universal Declaration of Human Rights (UDHR). After ten years of unauthorised absence they may be deprived of their citizenship, which is contrary to Article 15 of the UDHR.

Singapore was a British colony until 1959, when it became autonomous within the Commonwealth. In 1963 it joined with Malaya, Sarawak and Sabah to form the Federation of Malaysia. Tensions between Malayans, dominant in the Federation, and ethnic Chinese, dominant in Singapore, led to Singapore's separation from Malaysia in 1965. Ethnic tension in Malaysia included the refusal of many ethnic Chinese to perform military service. (see: Malaysia)

Shortly after the separation from Malaysia the government decided that instituting compulsory military service was the best way to build up the country's armed forces. Government leaders were reportedly impressed by Israel's small regular armed forces, supported by a large reserve force, and believed that the development of this type of armed forces would encourage national pride and self-reliance. At that time Singapore had particularly strained relations with Malaysia and Indonesia.23

This 2016 update was done in conjunction with the International Fellowship of Reconciliation, thanks to the research undertaken for their 2015 submission to the Universal Periodic Review on Kyrgyzstan.

16 Child Soldiers International (formerly Coalition to Stop the Use of Child Soldiers), Louder than words: an agenda for action to end state use of child soldiers, London, September 2012, p53.

20 General Counsel of Jehovah’s Witnesses. Evidence submitted to the OHCHR in response to the questionnaire on “best practices concerning the right of everyone to have conscientious objections to military service”, August 2003, replies to questions 1,4 and 5.

This is a list of those who are currently in prison for their conscientious objection to military service and their work for peace.

Here is a list of some of those currently in prison for their work for peace.

On December 1st support and write to Prisoners for Peace

December 1st is Prisoners for Peace Day. On this day (and every day) we encourage you to show solidarity with the activists and conscientious objectors imprisoned due to their peace work and their refusal to take arms and perform military service.

A list of some of those currently in prison for their work for peace. Write to them on 1st December, Prisoners for Peace Day, help us grow our solidarity!

We update our World survey of conscription and conscientious objection to military service on a rolling basis.

Updated reports on conscription and conscientious objection to military service are now available on Austria, Kyrgyzstan and Singapore.

Find all the available reports here.

1. This submission was prepared in June 2015 on the basis of the latest information available.

3. Conscientious objection to military service is not recognised in law or practice. Singapore has not ratified the International Covenant on Civil and Political Rights (ICCPR), under which this situation would be a clear breach of Article 18. It is however also contrary to Article 18 of the Universal Declaration on Human Rights (UDHR), which Singapore has endorsed. 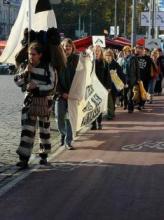 With new sources of information, we've been able to update the prisoners for peace list with hundreds of more names from Singapore and South Korea, primarily Jehovah's Witnesses. The process of adding names of conscientious objectors to our database is ongoing. They include prison addresses, so please consider writing to an imprisoned CO over the year, not just on Prisoners for Peace Day!

There are over 700 COs in prison in South Korea at present.