Conscription is enshrined in Article 127 of the 1999 Constitution, which states that "[e]very Finnish citizen is obligated to participate or assist in national defence, as provided by an Act."1.
The Finnish legislation concerning conscription has been completely overhauled in 2007. The new legislation came into force 1. January 2008.

Conscription lasts 180, 270 or 362 days (6, 9 or 12 months)3. The training period for officers and non-commissioned officers or for special duties is 362 days. The period for conscripts trained for work requiring special or professional skills is 270 days, and for the other rank and file duties 180 days. About 50% of conscripts perform a 180 days' military service4.

All men between the ages of 18 and 30 are liable for military service. However, persons with a right of domicile on the demilitarised Åland Islands are by law exempt from conscription5.
Reservist obligations apply up to the age of 50, and up to the age of 60 for officers. Reservist training lasts for a maximum of between 40 and 100 days, but in practice reservists are called up for training for a considerably shorter time6.
The peacetime strength of the Army is approximately 16,500 persons, of whom 8,700 are professional soldiers. Each year, 27,000 conscripts (including nearly 500 women) and about 30,000 reservists undergo training7.

Since 1985, Jehovah's Witnesses are legally exempt from service in peacetime, on providing prove of membership and participation in its activities8.

Annual conscription takes place from September to November, the exact date depending on the district in question. Male citizens who have turned 18 during the year are expected to present themselves at call-up to establish whether they are fit for service. Finnish citizens residing abroad may register by proxy. All those eligible for military service receive a draft notice in spring, even if residing abroad, assuming their address is known. If no notice has been received, the Provincial Headquarters in question, or when abroad, the nearest Embassy of Finland has to be contacted in August at the latest. Despite not having received the notice, the conscripts must take care of their recruitment duty10.

After completing military service, conscripts pass to the reserve. The new Conscription Act allows for selective activation of reservists even in situations which do not require even partial mobilisation (articles 78–89)11.

About 50% of the Finnish army is made up of professional soldiers, and probably an even higher number of the Navy and Air Force.

Soldiers serve essentially under the same general contract as other persons employed by the state, which can be in form of a permanent post or a fixed-term contract. However, in addition there are regulations on military discipline and on personnel in crisis management operations.

With the overhaul of legislation on conscription, also the legislation on conscientious objection has been overhauled. Conscientious objection is now regulated by the civilian service act 2007 (Siviilipalveluslaki 28. December 2007/1446)12.
As the conscription act also applies to women who wish to perform a voluntary military service, the civilian service act also applies to those women (article 1).

Unlike before, an application is now also possible in times of crisis or war. However, under those circumstances the application will be dealt with by a specially constituted board, which includes one member from the military. It is possible to appeal against the decision of the board (articles 18-22).

According to article 4 of the new act, the period prescribed for non-military service is 362 days13 - equal to the longest possible service time for conscripts, and twice as long as the service time of 50% of conscripts.

The new act on civilian service does not include the right to conscientious objection for professional soldiers.

Draft evasion is punished with a fine and a new call-up, which has led some into a repeating circle of fines and call-ups, if they refuse to comply14.

The case of total objector Antti Rautiainen is one example. Rautiainen has consistently refused to attend call-ups every time he has been called up since November 1997. Since then he has been called up altogether 20 times, and went to prison at least three times (59 days in 2001, 15 days in 2005, 16 days in 2007). In November 2005, Rautianinen was finally exempted from military service, officially for medical reasons, and against
his will and without proper medical examination. However, at that point he still had some unpaid fines (because he had not attended the call-ups) which had then been converted into prison sentences15.

Total objectors are sentenced according to two different laws, depending on whether they first
applied for legal recognition as conscientious objector or not.

Total objectors who are recognised as conscientious objectors and subsequently refuse to perform substitute service are sentenced according to Article 75 of the Civilian Service Act. According to the article, the maximum sentence is half of the remaining service time. However, if the sentence is less than half the remaining service time, then the total objector can be called up to finish his service after serving the prison sentence. The remainder of his service time is then calculated on the basis that each day in prison equals two days of civilian service. In practice, this means that the courts have not much choice when sentencing a total objector.

Total objectors who did not apply for conscientious objector status will be sentenced according to the Conscription Act.

5Act
on the Autonomy of Åland, 16 August 1991/1144, last amended 30
January 2004/68, Article 12: “A person with the right of
domicile may in place of conscription for military service serve in
a corresponding manner in the pilotage or lighthouse services or in
other civilian administration.”,
http://www.lagtinget.ax/text.con?iPage=59&m=228,
accessed 15 August 2008

A network of antimilitarist activists from East and North Europe has launched an online event called Antimilimarathon. For 42 consecutive days, starting on 1st June, they will share and post in social media a variety of events, workshops, discussions and webinars, promoting antimilitarist art and culture. If you want to participate in this marathon use the hashtag #Antimilimarathon.

Each month, we will feature a different WRI affiliate. This month it's Aseistakieltäytyjäliitto, an affiliate in Finland.

On 23 February the Helsinki appeal court decided to repeal a sentence given to a total objector by a district court. The objector said that his pacifist convictions were a reason for his conscientious objection. He had been sentenced for "refusal from civilian service". The appeal court decided that sentencing him would be discriminatory compared to Jehovah's Witnesses preferential treatment. Jehovah's Witnesses are exempt from military and civilian service in peace time.

Risto Miinalainen in jail in Finland 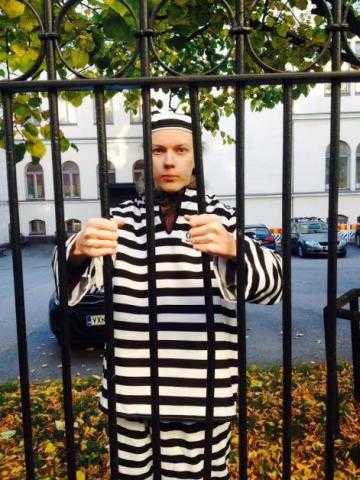 19 years old high school student Risto Miinalainen started to serve his 173 days prison sentence today 4 Oct. A group of 20 people, composed of his friends and activists of Finnish Union of Conscientious Objetors, walked with him from his school to the gates of Helsinki prison through the centre of the city today.

Risto was charged on "refusal from civilian service" (siviilipalveluksesta kieltäytyminen). He was sentenced by Eastern Uusimaa district court (Itä-Uudenmaan käräjäoikeus) on 20 April 2016. Helsinki sppeal court (Helsingin hovioikeus) refused to give him a permission to appeal on 6 July. Majority of Finnish total objectors are sentenced to home detention instead of prison, but Risto chose the prison sentence after reading about the negative experiences of some total objectors who has been sentenced to home detention.

Kaj Raninen has been involved in the antimilitarist movement since the beginning of the 1990s.  He is currently general secretary of the Finnish Union of Conscientious Objectors.  Ruka Toivonen, meanwhile, is a Helsinki based transgender activist and student. They study queer theory, prison systems and social history, but value their experience in radical grassroots organising as their highest and most precious education.  They have been involved in the Finnish Union of Conscientious Objectors for many years.  Here, they discuss the relative strengths and weaknesses of conscientious objection campaigns that focus on total objection and alternative service.

Finland still has comprehensive conscription for men.  Even though the number of people doing military service has declined and will most likely continue to do so, about two thirds of all men coming of age still go through military service (about 20,000 per year).  Women have had the option of volunteering for the army since 1994, and a few hundred enrol each year.  Approximately 7-8% of men choose an alternative, non-military service which is twice the length of the shortest period of military service (165 compared to 347 days) and the same length as the longest.

In Finland, conscription is among the most glorified institutions of the state among the people. For most of last decade polls have shown about 70 % support for keeping conscription, and none of the major political parties want to abolish it. In the beginning of 2015 the Ministry of Defence and the armed forces made a decision to cut the reserve by about a third, to 230,000 people, opening for the first time the chance to look for alternatives to mandatory conscription. The state faces broad international criticism for not respecting the rights of conscientious objectors.

Introduction to conscientious objection in Finland

An introduction to the Union of Conscientious Objectors in Finland, AKL. Download here. 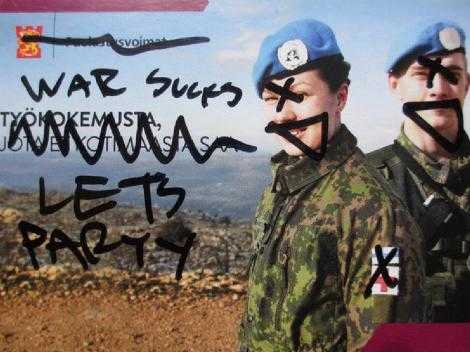 Concluding observations of the Human Rights Committee: Finland, adopted by the Committee at its 108th session (8–26 July 2013)

FINLAND CCPR/C/FIN/CO/6
14. While welcoming the legislative changes allowing for non-military services applications during mobilizations and serious disturbances and the fact that total objectors can be exempted from unconditional imprisonment, the Committee reiterates its concerns that the length of non-military service is almost twice the duration of the period of service for the rank and file and that the preferential treatment accorded to Jehovah’s Witnesses has not been extended to other groups of conscientious objectors (art. 18).

Conscription: coming slowly to and end in Finland?

Conscription have had a very special role in Finnish society. For decades, conscription for males was seen as an integral part of Finnish society, and for the vast majority of young Finnish men it was self evident that they would do military service. In fact, until the early 1990's, almost 90% of them did it. If someone dared to question conscription system, they were usually ridiculed.