However, a new force has been created in 1964 named National Guard.

Those in paragraphs (h), (i) and (j) are not exempted from reserve duties.

The Council of Ministers may authorize the Minister of Defence, in consultation with the Chief of the National Guard, to hire under contract:

The National Guard has an active force of 15,000 (including conscripts).[3]

Although Cyprus joined the Council of Europe in 1961, it did not introduce legal provisions for conscientious objection for several decades. The Cypriot government
has always defended its repressive position towards conscientious objectors by referring to the Turkish occupation of the northern part of the island.

The right to conscientious objection is, in fact, enshrined in the Constitution. According to Article 10: "No person shall be required to perform forced or compulsory labour" but this shall not include "any service of a military character if imposed or, in case of conscientious objectors, subject to their recognition by a law, service exacted instead of compulsory military service".[4]

In 1992, provisions for conscientious objection were included in Section 5 of the National Guard Law (Law 2/1992). There is no separate law on conscientious
objection.

Currently, conscientious objection is regulated by the National Guard Law of 2011 as amended, and the Decision of the Minister of Defence No 13 of 24 June 2011.

According to this law, those who, for reasons of conscience, refuse to fulfil the duty of military service in the National Guard, claiming religious or ideological convictions, may be recognised as conscientious objectors (Art. 47, para. 1).

The reasons of conscience raised must be derived from a general perception of life, based on conscientious religious, philosophical or moral convictions, which are inviolably implemented by the person and are expressed by holding a respective attitude. (Art. 47, para. 2)

A person cannot be recognised as a conscientious objector if:

The application for conscientious objection, together with the required supporting documents, is submitted to the competent Recruitment Office, (art. 50, para 2).

There are strict time limits, (within 20 days from the publication of the ministerial decision calling up conscripts), for application for CO status. (Decision of the Minister of Defence No 13, 24 June 2011, part. 4, (a) 1). This contravenes relevant international human rights standards.

In conjunction with the fact that the ministerial decision calling up conscripts is usually issued 3 months before the date of enlistment (April – July), this virtually means that serving conscripts cannot apply for CO status.

The decision is taken by the Minister of Defence, following a procedure outlined in the law (art. 51).

This includes a Special Committee appointed by the Minister of Defence, which consists of 5 members – two “high officers of the Force”, a law officer of the Law Office of the Republic of Cyprus, and two university professors in philosophy, social or political sciences, or psychology. The Special Committee has a quorum when there are 3 members present including the Chair or the person acting as Chair. This means that the Special Committee may hold a session even with a majority of military officers.

Alternative military service is performed in the National Guard without duties or specialties entailing use or training in use of arms.

Alternative civilian service is performed in posts of the public domain, determined by decision of the Minister of Defence, and consists of serving in services of public utilities or undertaking duties serving the public, prioritising the field of social care and environmental protection.

Currently, by decision of the Council of Ministers the increased duration of the alternative civilian service, compared to the military service, is as follows:

In both cases (alternative military service and alternative civilian service) reservist obligations equal to the ones for conscripts (art. 48, para. 2)

During times of mobilisation because of war or other emergency, provisions for the alternative civilian service  may be suspended by  decision of the Ministry of Defence (National Guard Law,). COs would then be incorporated into the alternative (unarmed) military service within the armed forces. (art. 59)

The Republic of Cyprus does not recognise the right to conscientious objection for professional soldiers who joined the National
Guard voluntarily.

The regulations for leaving the National Guard prematurely are presently not known.

Draft evasion (“insubordination”) is punished with a sentence of up to 3 years or with a financial penalty not exceeding 6,000 euros or both. (art. 67 of the National Guard Law)

According to the Military Penal Code, desertion of soldiers within the borders is punished:

As for officers, desertion within the borders is punished:

Those convicted for “insubordination” (including conscientious objectors who failed to report for alternative civilian service) and those convicted for desertion are not permitted to vote or to be elected in the presidential, parliamentary, European parliamentary and municipality elections. (art. 69, para. 1, b). They are not granted professional licence for private security, and if they had been granted in the past, it is considered invalid once the conviction becomes irrevocable. (art. 69, para. 1, c of the National Guard Law).

TRNC has its own armed forces and conscription system. Conscription is included in Article 74 of the Constitution, which states: "National service in the armed forces shall be the right and sacred duty of every citizen".[8] It is further regulated by the 2000 Military Service Law (59/2000).

The following three cases are pending against Turkey at the ECtHR, concerning COs from the northern, Turkish-occupied, part of Cyprus (the self-styled “Turkish Republic of North Cyprus”):

Haluk Selam Tufanli v. Turkey (case number 29367/15[12]). The application concerns the refusal of the applicant, a conscientious objector, to attend reservist service for military mobilisation training in 2011. On 02/06/2015 Haluk Selam Tufanli submitted an application to the ECtHR against Turkey for violations of articles 5 §§ 1, 4 and 5, 9 and 13 of the European Convention of Human Rights: (Art. 5) Right to liberty and security, (Art. 9) Freedom of thought, conscience and religion, (Art. 13) Right to an effective remedy.

Murat Kanatli v. Turkey (case number 18382/15[13]). The application concerns the refusal of the applicant, who is a conscientious objector and an activist, to attend reservist service when called to attend training for military mobilisation in 2009. On 06/04/2015 Murat Kanatli submitted an application to the ECtHR against Turkey for violations of articles 5 §§ 1, 4 and 5, 6, 9, 13 and 14 of the European Convention of Human Rights: (Art. 5) Right to liberty and security, (Art. 6) Right to a fair trial, (Art. 9) Freedom of thought, conscience and religion, (Art. 13) Right to an effective remedy, (Art. 14) Prohibition of discrimination.[14]

On 7/1/2019, the Council of Ministers submitted to the Parliament of the northern, Turkish-occupied, part of Cyprus (the self-styled “Turkish Republic of North Cyprus”) a Draft Amendment to the Military Service Act which included provision for conscientious objection. The Parliamentary Committee of Law, Political Affairs and Foreign Relations started to discuss the draft law and held a number of meetings which involved the Initiative for Conscientious Objection in Cyprus, the Human Rights Foundation, the Military, the Ministry of Foreign Affairs and the State Prosecutor, and others, including an international Jehovah’s Witnesses association, and a retired military officer. Unfortunately, after the change of government, the draft Amendment proposal was withdrawn in autumn 2019 and there has been no further discussion on the matter.[15]

Another conscientious objector in Northern Cyprus faces a prison sentence

Another young man in the self-proclaimed state of Northern Cyprus faces a prison sentence due to his refusal to perform compulsory military service.

Cyprus: Administrative court’s judgement in favour of CO whose application had been rejected

In March, the Administrative Court of the Republic of Cyprus has ruled in favour of a conscientious objector whose application had been rejected. Despite not touching upon crucial issues, the Court's decision in favour of the applicant CO illustrated the arbitrary way the applications for CO status are handled in Cyprus.

The European Court of Human Rights (ECtHR) has accepted a Turkish Cypriot conscientious objector's application against Turkey. Conscientious objector Halil Karapasaoglu, based in North Cyprus - a self-declared state recognised only by Turkey, was sentenced to 20 days in prison in January 2019. His sentence was cut short to 3 days after his successful appeal. In July 2019, Karapasaoglu submitted an application to the ECtHR for violations of articles 5, 6 and 9 of the ECHR - referring to deprivation of liberty, the right to a fair trial and the right to freedom of thought, conscience and religion respectively.

In January, there were significant developments for conscientious objectors in Northern Cyprus: Conscientious objector Halil Karapasaoglu, who has repeatedly declared his refusal to perform reserve service, was put on trial and sentenced to a fine - which Halil refused to pay and was imprisoned. Meanwhile, Initiative for Conscientious Objection in Cyprus mobilised hundreds of people to support Halil - both on the streets and on social media. Halil was released following his appeal. In parallel to the public discussions on Halil's case, the government of the North Cyprus, a self-declared state recognised only by Turkey, announced a draft law recognising the right to conscientious objection.

Conscientious objector groups from the eastern Mediterranean region have recently issued a statement on the ongoing military crisis in their region. Declaring their solidarity with refugees escaping from war and repression, they made a call to the international community to pursue peaceful solutions, rather than militarised ones, for the ongoing violence in the region. “The world's reaction to the current regional violence,” the statement declares, “should be building societies, assisting refugees, and mediating between fighting parties, not selling arms, bombings and providing military assistance.”

We are conscientious objectors from all around the eastern Mediterranean region. Our region has suffered for so long from oppression, injustice, militarisation, military occupations and wars, as well as poverty, illiteracy, hunger and lack of social infrastructure. In this difficult period, when our region seems to fall even more into the chaos of war, we raise a common voice for peace and against militarisation.

We refuse to allow this cycle of violence, initiated by oppressive states and economic interests, to continue; we refuse to be a part of it; we refuse to be enemies with people who just happen to be of a different nationality or religion; we will not be dragged into their wars and armies leading to death and destruction in the region.

You can also protest in writing to the authorities in Northern Cyprus. Find all the details here (including an email alert): NORTHERN CYPRUS: Haluk Selam Tufanlı imprisoned 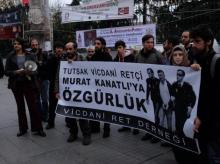 Following a meeting in Cyprus of conscientious objector and war refuser movements in the Eastern Mediterranean region at the end of January, when CO in Cyprus Murat Kanatlı (and co-organiser of the meeting in Nicosia) was imprisoned for ten days in February, solidarity actions took place in Turkey, Greece and Israel (by Druze Palestinian objectors). In Athens, activists were temporarily detained for their protest at the Turkish embassy. Watch a video of activists in Istanbul here.