Britain only had short periods of conscription. Conscription was originally introduced in 1916, but abolished in 1919. It was re-introduced in May 1939 and remained in force on a war-time footing until 1948. In that year, the National Service Act provided for conscription for five years with an option for renewal every five years. The provision was renewed in 1953, but before the next renewal in 1958, the government had announced in the 1957 annual Defence Review that it was to be legally phased out by the end of 1960. In the same review the governments' commitment to the 'British H-bomb' was announced, rendering large military forces an unnecessary expense. The last conscripts were discharged in 19631.

Recruitment to the UK's Armed Forces is voluntary. The regulations and terms of service differ considerably between the three different branches of the Armed Forces – the Army, Royal Navy, and Royal Air Force.

All three Armed Forces recruit from the age of 162, the army more intensively than the other two, which generally prefer recruits with some qualifications or qualification potential. Unlike the other two Armed Forces, the army requires under-18s to serve a
longer minimum term than adults, by not counting the period up to the 18th birthday as part of the minimum requirement. The Army also enlists more recruits in any year than the two other Armed Forces added together. Also the Royal Air Force recruits from the age of 163.

More reason for concern is that the Armed Forces target young people even younger – and that goes down to 12 years “old”:

Serving personnel are severely restricted in their human rights, far beyond what could be deemed necessary. For the army, QR(Army) J5.581 states: “a. Regular service personnel are not to take any active part in the affairs of any political organisation, party or movement. They
are not to participate in political marches or demonstrations.”6

Each one of the three services has its own regulations governing the right to conscientious objection. These have so far not been in the public domain, and have only recently been obtained by War Resisters' International under the Freedom of Information Act 2000. These are:

While the application procedure is similar for the three branches of the Armed Forces, there are also important differences.

Generally, an application has to be submitted to the Commanding Officer, together with written evidence to support the case (i.e. references). In case of religious conscientious objectors, a statement by a minister of the religion concerned should also be included.

It has to be pointed out that for all three services an application for discharge on grounds of
conscience does not prevent deployment. During the time the application is being processed, the applicant remains a member of the Armed Forces with all duties this implies. There is no right to ask
for service without arms during the processing of the CO application.

“Applications will not be considered from any applicant who is:

1. Absent without leave or a deserter.

2. The subject of outstanding disciplinary action.

3. Undergoing a sentence of detention or imprisonment.

Until such time as the individual has returned to unit, any outstanding disciplinary action has been taken and any sentence imposed has been completed.”7

According to the appeal court judgement Mohisin Khan v RAF, paragraph 9 has been added with the update of the regulations on 28 October 20038.

It is almost impossible to describe the practice in the last years – or even decades – as the entire system is almost unheard of. Until recently, the regulations governing the right to conscientious objection have not been in the public domain. In a 2005 report, Mark Stolwijk wrote, concerning the regulations for the army: “The Ministry of Defence considers the Instruction as
a confidential document and it is actually forbidden to publish the Instruction outside the army. There are believed to be similar instructions for the navy and the air force, but the content of these
instructions is not known.”

In August 2007, War Resisters' International submitted a request for information under the Freedom of Information Act 2000, and finally received the regulations for all three forces. As mentioned in the introduction, the rules and regulations governing this right are not easy to come by, making it difficult for serving personnel to claim this right. The term “conscientious objection”
does not yield any results using the Ministry of Defence's search utility9, nor is it included in the MoD's index10.

It is therefore not surprising that not many serving soldiers or officers know about the existence of this right, and make use of it. This is contrary to United Nations Commissions on
Human Rights resolution 1998/77, in which the Commission affirms “the importance of the availability of information about the right to conscientious objection to military service, and the means of acquiring conscientious objector status, to all persons affected by military service”11. Until recently, the regulations have not even been available to organisations counselling conscientious objectors, such as At Ease.

It is therefore no surprise that according to the information obtained by War Resisters' International, only six individuals (3 RAF personnel, 3 Navy personnel) have applied for discharge on the grounds of conscientious objection since 2000. Of these cases, five were successful (3 RAF personnel, 2 Navy personnel)13. War Resisters' International is also aware of the case of an Army Reserve Officer who applied for discharge as conscientious objector, but has then simply been discharged administratively, as if his application had been a matter of convenience rather than conscience14.

Penalties for desertion and absence without leave and for other military related crimes are regulated in the Armed Forces Act 200816.

According to section 8, desertion can be punished with life imprisonment if the aim was to avoid a period of active service, otherwise with no more than two years imprisonment.

Being absent without leave can also be punished with imprisonment of up to two years (section 9).

Disobedience to lawful commands can be punished with up to ten years imprisonment
(section 12).

According to media reports, many soldiers are trying to get out of their service using a variety of means. John McDonnell, Labour MP, said that the numbers of British troops trying to absent themselves from service in Iraq were rising. According to him, a lot more seeking to avoid service, through different mechanisms17.

According to military law expert Gilbert Blades, who represents soldiers at courts martial, the numbers leaving because of Iraq are often obscured as they were not counted as conscientious objectors18.

Two high-profile cases of Iraq war resisters underline this point. Benjamin Griffin, a former SAS soldier, refused to return to Iraq while on leave in March 2005 after three month of service in Baghdad. Unexpectedly, he was discharged from the army “with a glowing testimonial”19.

Malcolm Kendall-Smith, a medical officer in the Royal Air Force, fared less well. He refused to serve in Iraq in July 2005, and was subsequently court-martialed, and sentenced to eight month imprisonment, plus a discharge from the Air Force.

Taken together, the cases of Khan, Griffin and Kendall-Smith leave completely open the question whether the United Kingdom might formally recognise selective objection in the case of a member of the professional armed forces. Selective objection was sometimes recognised in implementing conscription legislation.

13It
is interesting that according to information obtained by David Gee
in March 2007, from April 2001 to March 2006 there had been four
successful applications, all from Air Force personnel, and none for
the Navy or Army. These numbers do not add up.

CO Day 2021: Showing solidarity with COs in Turkey and around the world

International Conscientious Objection Day (CO Day), 15th May, was celebrated with actions and events by activists from around the world in solidarity with those who have and those who continue to resist war. This year we had a particular focus on Turkey.

Israeli conscientious objector Taya Govreen-Segal, currently interning in the WRI office in London, is speaking at various events over the coming weeks around Britain.

Joe Glenton: why I refused to fight in Afghanistan

Conscientious Objector Joe Glenton and author of Soldier Box, speaking on why he refused to serve in Afghanistan: http://joeglenton.com/

As part of the panel as part of the COnscription exhibition on International Conscientious Objectors Day: http://www.filmpro.net/conscription-panel-discussion

With thanks to Paul at Fourman Films for this: http://www.youtube.com/user/fourmanfilms 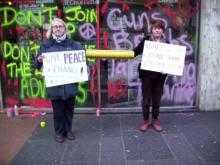 Three women painted the windows of the Army recruiting office in Glasgow yesterday, 1st March, in protest at the dishonest propaganda used to persuade young people to join up.

Conscientious objection for the unemployed

WRI's British section, the Peace Pledge Union, reported in the latest issue of its magazine Peace Matters on the case of an unemployed who was forced by the Job Centre to take a job at the Military Preparation College in Bangor outside of which he organised a (unconnected) protest a few weeks before. The job is to get young people of 14-19 to join the military.

The Ministry of Defence of Britain released the numbers of conscientious objection applications since 2001, following a Freedom of Information request. According to the information provided by the MOD, there have in total been nine CO applications from 2001 until 2010, of which six have been successful. Between 1990 and 2000, 13 Royal Navy personnel and one soldier applied for conscientious objector status, a separate Freedom of Information response shows.

Michael Lyons, a medical worker in the British navy, was denied recognition as conscientious objector on 17 December 2010. Michael Lyons joined up in 2005, aged 18. Since then he has stopped to
think more about his work, partly prompted by researching information about the war in Afghanistan after being told some months ago that he would be deployed there in 2011. He applied for conscientious objection after reading of the "enormous under-reporting of civilian casualties in the conflict I was about to enter", according to the Buxton Advisor.

They said “No” to War: British Women Conscientious Objectors in World War II

He handed himself in after two years and six days' absence, during which he went to south-east Asia and Australia.