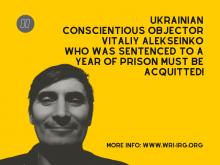 On 15 September 2022 conscientious objector Vitaliy Vasyliovych Alekseienko, was found guilty of ‘evasion of military service during mobilisation' and sentenced to a year in prison. Alekseienko filed an appeal in which he asked to be released with a probation term. The Ivano-Frankivsk Court of Appeal has scheduled a hearing of his appeal on 17 November 2022.

Vitaliy Alekseienko filed an appeal in which he asked to be released with a probation term. The Ivano-Frankivsk Court of Appeal has scheduled a hearing of his appeal on 17 November 2022.