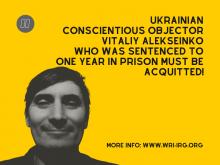 On 15 September 2022 conscientious objector Vitaliy Vasyliovych Alekseienko, was found guilty of ‘evasion of military service during mobilisation' and sentenced to a year in prison. Alekseienko filed an appeal in which he asked to be released with a probation term. The Ivano-Frankivsk Court of Appeal, which originally scheduled 17 November for the hearing of his appeal, has later postponed it to 12 December 2022. If you haven't written to the Court already, you can still send your emails of support for Vitaliy to the Court until 12 December.

Vitaliy Alekseienko filed an appeal in which he asked to be released with a probation term. The Ivano-Frankivsk Court of Appeal originally scheduled a hearing of his appeal to take place on 17 November 2022, which was later postponed to 12th December.