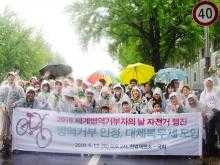 The court ruled that Article 5 of the Military Service Act (MSA), which fails to provide alternative forms of national service, is unconstitutional and obligated lawmakers to change the law by the end of 2019. Meanwhile, regrettably, the Court also ruled that Article 88 of the MSA , which provides up to 3 years of imprisonment for anyone who fails to enlist without justifiable grounds, does not violate the Constitution.

The decision recognising the right to conscientious objection was welcomed by peace and human rights organisations in South Korea, including our affiliate World Without War (WWW). In a joint statement, organisations including Center for Military Human Rights Korea, Minbyun Lawyers for a Democratic Society, and People's Solidarity for Participatory Democracy, as well as WWW, said

The decision brings us closer to a more mature society, where the conscience of various individuals is respected and human rights are guaranteed, opening the door of peace for many who were forced to choose between military service and imprisonment.

The organisations also called on the government for “a swift introduction of an alternative service for conscientious objectors”. Read their full statement here.

Thank you to everyone who joined our call to support Korean conscientious objectors on the International Conscientious Objection Day and sent our CO-Alert to the Korean authorities.