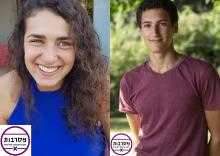 Conscientious objectors Luhar Altman and Hilel Garmi from Israel are imprisoned for their refusal to serve in the army. This is Altman's first, Garmi's second imprisonment.

Send your protest emails to support Altman and Garmi here.

On 6th August, Monday, Luhar Altman and Hilel Garmi declared their refusal at the military induction centre with the support of Mesarvot (a solidarity network of people refusing to serve in the Israeli military for political reasons), as well as their friends and family. Following their refusal, both were imprisoned, Altman for 10 days and Garmi for 20 days. They are behind bars at the moment.

Hilel Garmi was first imprisoned on 29 July, six days after he failed to report at the induction center and undergo enlistment. He was arrested by plainclothes soldiers at his home - an exceptional action by the Israeli army which hasn't been seen in recent years. You can read Garmi's full declaration here.