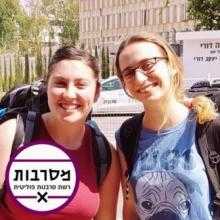 Conscientious objectors Noa Gur Golan and Hadas Tal from Israel were imprisoned again for their refusal to be conscripted.

Noa Gur Golan , 19, has already served 87 days in military prison, and was recently sentenced to another 30 days. Hadas Tal, 18, who's spent 50 days behind bars, was sentenced to 10 more days for her refusal to serve in the IDF.

To support Gur Golan and Tal with your protest emails, click here.

In her written statement to the Israeli army’s conscientious objectors committee, Tal wrote:

In another statement, she said “It is important not to let this system continue existing without resistance. The refusers who sat in prison before me did not end the occupation, but there is great significance to our acts — in raising awareness and creating public conversation.”

Prior to her latest appearance before the conscientious objectors committee, Noa Gur Golan posted on Facebook and said:

"I will go back for the fourth time, because even when the barbed wires look threatening, and they remind me that I am in prison, I know I did the right thing. I know that if I was given the privilege and the strength to say no, I know that I was given a responsibility, and I will fulfill it."

As well as filling in our email alert, you can also send your solidarity messages to Noa and Hadas. Please use this link to write to them.