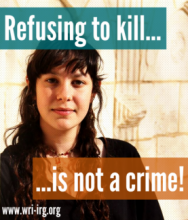 In her statement following her release Ben-Abba said “The army can call the waiver [from mandatory conscription] whatever it wants, but the fact of the matter remains that it gave me a waiver as a result of my simple refusal to participate in a system that uses violent means to oppress another people, which has imposed an occupation upon it for 50 years, and is imposing a siege, the consequences of which are yet to be seen.”

War Resisters' International stands in solidarity with Atalia Ben-Abba and all conscientious objectors. We are grateful to everyone who's sent CO Alerts for Ben-Abba, and supportive messages.