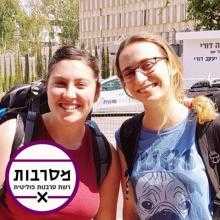 Israeli refusers Noa Gur Golan and Hadas Tal have been imprisoned for the third and second times respectively for their refusal to join the Israeli military.

In her refusal statement Hadas explained the process by which she came to the decision to refuse to enlist. She wrote:

Until the 10th grade I did not know there is an occupation. I recently found a map I had drawn in the 9th grade — the occupied territories did not appear there, only empty space. But in the 10th grade I began to develop a political consciousness. I read articles on “Local Call,” testimonies from “Breaking the Silence,” posts on social media, and I was exposed to a reality I did not know previously – the occupation. The helplessness of a population controlled by soldiers. I remember especially the revelation that so close to me there is a world where soldiers who do not speak your language enter your family home in the middle of the night as a routine thing. By the 11th grade I already knew that I would refuse to enlist.

Watch a video of Noa speaking about her refusal decision here.

As well as filling in our email alert, you can also send your solidarity messages to Noa and Hadas. Please use this link to write to them. You can also write to Israel's embassies abroad. Find a list of these here.