Since a coup d’état in 2014, Thailand has been under the rule of a military junta, the National Council for Peace and Order (NCPO).  There has been a militarisation of the legal system with the military creating its own versions of law and trying some cases in military courts.  Thai Lawyers for Human Rights report that in the period up to 30th September 2015, 1,629 civilians had been tried in 1,408 cases in military courts.  The militarisation of the legislature and the judiciary has been used to silence dissent including through banning political gatherings of five people or more and bringing criminal charges against critics of the regime.  Soldiers have taken on many of the jobs traditionally done by the police and have been given policing powers including the power of arrest.  Both the military and the police undertake surveillance of suspected political opponents and martial law means that those detained can be held in a military compound for up to seven days with soldiers acting as prison guards, in violation of the International Covenant on Civil and Political Rights. 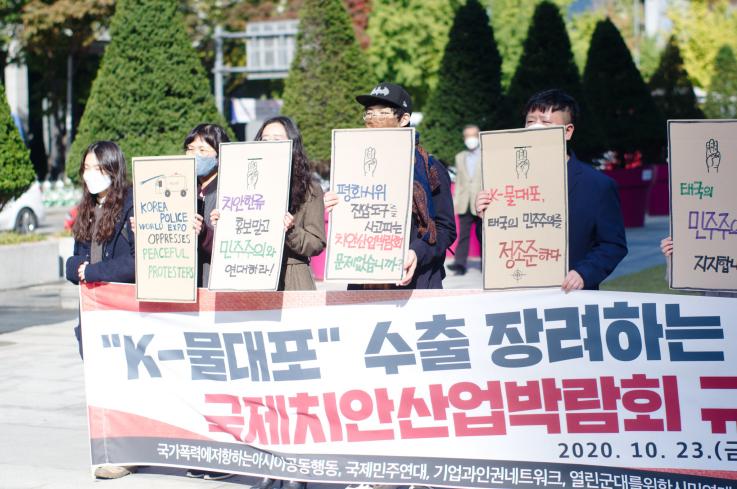 More than two years since the National Council for Peace and Order (NCPO) staged a coup in Thailand, the military regime continues to justify its grip on power by running the systematic militarisation of law and the judicial process against its critics, political dissidents and ordinary citizens, according to a recent report by the Thai Lawyers for Human Rights. In doing so, the military has created its own versions of law and manipulated the entire justice process, depriving civilians of their rights to fair trial and violating their rights to freedom of expression...

Bangkok: Theerawan Charoensuk never thought posting a photo of herself on Facebook holding a red water scoop with greetings for next week's Thai New Year would result in her being charged with sedition and facing up to seven years' jail.

The bowl had a message from Thailand's former prime minister Thaksin Shinawatra, a divisive figure who lives in exile to avoid jail on corruption charges.

"Although the situation is heated, it's hoped that brothers and sisters will be soothed by the water in the bowl," it read.

After Theerawan, a 57-year-old housewife from the northern city of Chiang Mai, was taken to a military base for questioning, military spokesman Sansern Kaewkamnerd warned that Thailand's military-led regime is running out of patience with those it sees as creating conflict, as south-east Asia's second-largest economy enters an uncertain transition from strict military rule to what ruling generals describe as "Thai-style democracy"...

AN ORDER by the junta giving sweeping police powers to soldiers is part of the “steady erosion of human rights protections”, campaigners said Tuesday as they called for the law to be rescinded.

Last week, the junta government of Prime Minister Prayut Chan-o-cha issued an executive order awarding all soldiers ranked sub-lieutenant or higher the power to detain suspects for up to a week for a raft of different crimes.

The military said the order was necessary to follow through on their vow to crack down on “mafia figures”, adding there were not enough police officers to do the job.

But the move has been criticised by rights groups who say it is a new judicial power grab by a military government that has clamped down on dissent since seizing power just under two years ago...
Visit: http://www.nationmultimedia.com/news/breakingnews/aec/30283331

The following report highlights three local and international companies that manufacture “non-lethal” crowd control weapons. These weapons are currently used by Israeli authorities and security forces, mainly to suppress non-violent demonstrations in the occupied Palestinian territories, in violation of the right to freedom of expression and association. Despite the fact that they are often labeled as “nonlethal” weapons, they have already been proven as potentially lethal in different incidents around the world, when the use of these weapons led to the death of demonstrators.

The report focuses on three types of weapons as case studies: tear gas canisters, which are produces and marketed by Combined Systems, Inc. (CSI) and M.R. Hunter; “the Scream”, manufactured by Electro-Optics Research & Development (EORD) and LRAD; and “the Skunk”, which is manufactured by Odortec, with the supporting companies: Man and BeitAlfa Technologies. The report will highlight the harmful consequences of these weapons, including their potentially lethal effects. The occupied Palestinian territories are being used as a lab for testing new civil oppression weapons on humans, in order to label them as “proven effective” for marketing abroad.