War Resisters' International has been informed today by its Israeli affiliate New Profile about the repeated imprisonment of conscientious objector Shir Regev.

Shir Regev, 20, from the village of Tuval in the North of Israel, an anarchist and anti-Occupation activist, has began serving his second prison term (10 days) on 24 March. Shir Regev chose not to show up at the Induction Base on his intended enlistment date, and was later arrested and sentenced to 20 days in prison on 2 March (at that point he did not yet authorise publicising his case, which is why it is only reporting now). He is presently held in Military Prison no. 6 near Athlit.

In a statement he has made before going to prison, Shir Regev says: 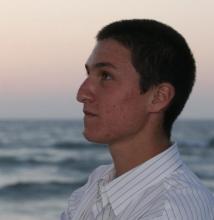 I believe it is my personal duty to refuse and defect from an army whose main purpose is to serve as an occupation police for maintaining “Israeli order” and imposing it on defenseless Palestinians who are denied citizenship.

And what is this “Israeli order” ? It is an ongoing process, in effect over 42 years, comprising a military regime over the Palestinians, denying them access to the Palestinian community resources of land, water, agricultural crops and ores. It also entails pollution of their land and their streams, along with support for disenfranchisement by settlers who live in the same areas, under a separate system of seemingly democratic laws. And I have not even mentioned the violation of more basic Palestinian human rights, like denying their freedom of movement, and causing bodily harm, including mass killing, without due investigation of alleged criminal offenses of the gravest kind recognized in Israeli law. Carried out in a territory under military occupation, these acts also constitute war crimes and other violations under international law.

Since I have the medical profile of a “combat soldier”, had I joined the army, there is no doubt I would have been sent to serve this ‘Mafiosi’ system, which has almost nothing to do with the IDF’s designated role as “Defense Forces”… This is an army that serves interests in which I do not believe. Therefore, in the dilemma between doing such service and obeying my conscience, I have no doubt about my decision. The day will come when my decision is appreciated by people who presently deny the horrible reality which we as a society are creating for another people and the damage we are inflicting on the souls of many young Israelis who may not be aware of the moral degradation in which they take part.

Since the prison authorities often block mail from reaching imprisoned objectors, we also recommend you to send them your letters of support and encouragement via Yesh Gvul: yeshgvul2001@yahoo.com, and they will be printed out and delivered during visits.

War Resisters' International calls for letters of protest to the Israeli authorities, and Israeli embassies abroad. An email letter to Israels Minister of Defence Ehud Barak can be sent at http://wri-irg.org/node/9834.