On 14 August 2009, US conscientious objector Travis Bishop was sentenced to one year in prison on charges of going absent without leave (AWOL).

Travis Bishop has served in the US army since 2004. He was deployed to Iraq from August 2006 to October 2007. According to his lawyer, he had doubts about taking part in military action since then, but it was only in February 2009, when his unit was ordered to deploy to Afghanistan, that he considered refusing to go. In the period before he was due to be deployed, Travis Bishop’s religious convictions became stronger, and led him to conclude that he could no longer participate in any war.

"I started to see a big difference between our reality there and what was in the news," Bishop explained to Truthout about his experience in Iraq, but went on to add that morality and religion played a role as well.

Travis Bishop received his orders to deploy to Afghanistan in February, but at the time "didn't know there was a support network or a way out at all. I thought GI resistance was something archaic from Vietnam."

As his deployment date approached, he met with other soldiers at a GI resistance cafe, "Under the Hood", in Killeen, Texas.

"They told me not only do I have a choice, but I have a support network backing me up," Bishop explained, "I told them my thinking, and they said that I sounded like a CO. They put me in touch with (James) Branum and when I learned from him what a CO was, I knew I couldn't go."

Travis Bishop went absent without leave (AWOL) for one week the day his unit deployed, "because I didn't have time to prepare to file for CO status. So while AWOL I prepared a statement and filled out my application for CO (status). Then I went back (to Fort Hood) with Branum and turned myself in. I never planned on staying AWOL. They gave me a barracks room and assigned me to a platoon and told me to show up to work the next day. That was it. They started the CO process, but they also started the Uniform Code of Military Justice process, and that's where it gets shifty."

Another US war resister, Victor Agosto, was sentenced to 30 days in prison on 5 August 2009. 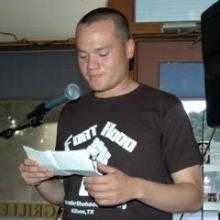 A victim of the highly unpopular stop/loss policy, SPC Agosto, whose contract was over at the end of June, was told that his next assignment would be deployment to Afghanistan. At the end of April, with support of local residents, Agosto went public with his intent to refuse the orders to Afghanistan, on the basis of the occupation being “immoral and unjust.”

Instead of going "underground" and trying to escape punishment from the Army, Victor Agosto chose to remain at Fort Hood as a tangible symbol of GI resistance. Refusing all orders that directly support the war, he has found himself in an overwhelming struggle to maintain his honor and position.

After a one-hour hearing 5 August 2009, a military court in Ft. Hood, Texas, demoted Victor Agosto to the rank of private and sentenced him to 30 days in jail. When he heard the sentence, Agosto ripped from his uniform the patch displaying his specialist rank, symbolically embracing his demotion. After completing his jail sentence, Agosto will likely receive a less-than-honorable discharge.