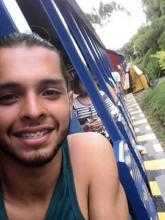 Conscientious Objector Diego Fernando Blanco López from Colombia was illegally recruited by the Colombian army, despite his right to postpone due to being a student. He is currently being forced to serve in the Grupo de Caballeria Mecanicado No 4 Juan de Corral of the Colombian Army in Rionegro, Antioquia.

Since his declaration of conscientious objection on 20th March 2017, Diego Blanco has been subjected to aggression and harassment by his superiors. When he refused to take arms earlier this week, he was attacked by the First Sergeant Oscar Camacho Cartagena and has been threatened with a court martial for disobedience/insubordination.

Support Diego Blanco with your protest emails to the authorities. Send your emails here.

Diego started his studies at the Instituto Tecnico de Tabulación y Comercio on 6th December 2016. Three days later, on 9th December, he presented himself at the 4th Zone of Recruitment (Cuarta zona de reclutamiento) in Medellin to formalise his situation regarding his military service and presented his papers confirming his studies.

On 10th December 2016, however, he was recruited as “soldado bachiller”, which was in violation of his right to postponement of military service while studying, and transferred to the Batallon de Apoyo y Servicios para el Combate No 4 Jorge Eduardo Sanchez Rodriguez, based in the city of Medellin on the same day.

On 5th February 2017, he was transferred to the Grupo de Caballeria Mecanicado No 4 Juan de Corral in Rionegro, Antioquia. Meanwhile, he had conflicts with his superiors due to his resistance to serve in the army, and his insistence on the fact that he shouldn't have been recruited because he was a student.

On 13th February 2017, he was brought to the installations of the 4th Zone of Recruitment with the promise of being released from military service. There he had a meeting with Lieutentant-Colonel Harol Felipe Paez Roa and a psychologist. He explained his reasons for refusing to be part of the military and mentioned the numerous meetings he had before with the psychologist of the battalion. The psychologist's diagnosis, however, claimed that the only thing Diego wants to achieve is a attention for himself. A month later, on 20th March, Diego formally declared himself a conscientious objector.

Since his declaration, Diego is being subjected to aggression and harassment by his superiors. On 22 March 2017, he refused to take up arms and was attacked by the First Sergeant Oscar Camacho Cartagena, and has been threatened with a court martial for disobedience/insubordination.

As well as using our protest email, please consider cutting and pasting the email and from your own email account sending it to:

Please tell others about Diego's situation on social media and other platforms, and share this call with others.