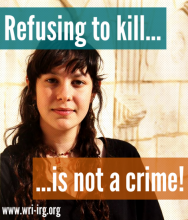 Conscientious objectors Atalia Ben-Abba, Tamar Alon and Tamar Ze'evi from Israel were imprisoned again for their refusal to serve in the IDF. This is Atalia's second, Tamar and Tamar's sixth imprisonment.

Send your protest emails to the Israeli authorities here.

"Our present reality needs to be changed, and my refusal is my way to change it"

In her declaration, Atalia, who has already spent 20 days behind bars and is currently spending 30 more following the final court decision, states:

I spoke once to a Palestinian activist who described the first time he met Israelis. All he saw, as a kid, were foreign soldiers, speaking a language he doesn't understand, entering his village and demolishing houses. He feared them and was angry. Only years later he met Israelis who showed him another side. Hearing him made me understand the endless cycle we're in – violence begets violence, there's no solution in this way. Cooperation with Palestinians enables us to create a relationship that paves the way to peace and proves that there is a chance for partnership between the two sides for a better future.

Along with Atalia, Tamar Ze’evi and Tamar Alon have also repeated their refusal and sentenced to 30 days each. This will add to 97 and 100 days each has already spent behind bars in total respectively.

As well as filling in our email alert you can also send your emails of support to Atalia, Tamar and Tamar. Use this link to write them and your messages will be passed on.