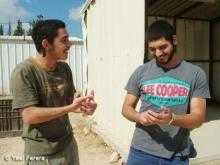 In Israel, conscientious objector Uriel Ferera has been imprisoned for the tenth time. He is in Military Prison 4 for a further 20 days.

Repeated imprisonment is a violation of international legal standards. Just last month, the United Nation's Human Rights Committee, in its Concluding observations, reiterated their concern that individuals whose conscientious objection applications are rejected may be repeatedly imprisoned. They called upon the Israeli authorities to refrain from repeated imprisonment for refusal to serve in the armed forces, which may constitute a violation of the principle of ne bis in idem. Read more here.

As well as filling in our email alert (/node/24138), you can also post letters of support to:

If you have access to a fax machine, it  would also be useful to fax a copy of your protests emails to:

New Profile have also sent a complaint to the United Nation Human Rights Council's Working Group on Arbitrary Detention in the UN.