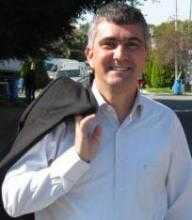 Write a protest email about his imprisonment here: /node/22926

Murat Kanatli, a board member of the European Bureau for Conscientious Objection, declared his conscientious objection on ideological grounds in 2009 and has since refused each year to participate in the annual compulsory military exercises in the northern part of Cyprus.

Murat's first appeared in Court related to this 'crime' in June 2011. Since then he has taken his case the Constitutional Court, and faced numerous postponements and trials.

The Initiative for Conscientious Objection in Cyprus has called upon the international community to express its solidarity with Murat Kanatli. A list of Turkey's's embassies abroad can be found here: http://embassy.goabroad.com/embassies-of/turkey