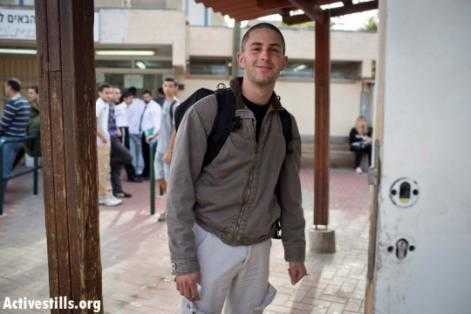 19-years-old, from Haifa, Natan Blanc declared his refusal to serve in the Israeli Army for the ninth time on 18th April, and was sentenced to 20 days' imprisonment for his refusal.

This will bring his time in prison to over 150 days.

You can send a protest email here.

Hear Natan speak about why he refuses to join the Israeli military here.

You can also read Natan's refusal declaration in full here.

War Resisters' International are exploring other international mechanisms that can be used to stop the repeated persecution of Natan and other conscientious objectors.

What you can do

Since the prison authorities often block mail from reaching imprisoned objectors, we also recommend you to send them your letters of support and encouragement via e-mail to Natan at nathanbl@walla.com. He will see them when he next leaves prison.

War Resisters' International calls for letters of protest to the Israeli authorities, and Israeli embassies abroad. An email letter to Israel's newly appointed Minister of Defence can be sent at /node/21593.