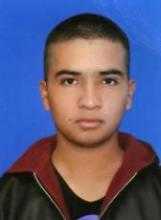 Jose Luis Peña was detained and recruited by the Colombian National Army in a batida on the 17th of December of 2009 in the city of Bogota, and taken to the Batallon de Infanteria y Selva No 50 de Tolemaida. His demand to be recognised as a conscientious objection was ignored. On January the 11th and having completed his first period of instruction, he received a period of leave, from which he did not return to the barracks.

Jose Luis was detained by the Departamento Administrativo de Seguridad DAS on the 11th of November of 2010, as a desertor. After his detention in Bogota he was sent on the 15th of November to Leticia following the orders of Judge No 10 de Instruccion Penal Militar Batallon de Infanteria y Selva No. 50.

Even though Jose Luis has been formally discharged from military service, he is still being held in custody for the crime of desertion, for which he has never received a legal notification. On November the 17th he was questioned and continues to be arrested at Leticia Amazonas.

The recruitment of Jose Luis Peña is illegal under Colombian and international law for several reasons:

1. Recruitment during a 'batida'
Recruitment is regulated in Colombian law 48 of 1993. While this law requires to "clarify ones military situation when someone reaches the age of 18" (Art 14). However, failure to do so can only be punished with a fine (Art 41 and 42). The law does not specify that in such cases the normal recruitment procedure, as outlined in Articles 14-21 of the law, does no longer apply.
In addition, the UN Working Group on Arbitrary Detention declared in its Opinion No 8/2008 (Colombia) the practice of recruitment in the form of raids (batidas), and the recruitment of conscientious objectors a form of "arbitrary detention".

War Resisters' International calls for letters of protest to:
- Teniente Ana Rocio Gomez Romero. A protest email (in Spanish) can be sent at http://wri-irg.org/node/11762