This year's G8 took place in Heiligendamm, a hotel next to the Baltic Sea in Germany, that was protected by a fence of over 10 kilometers. WRI with two of their staff was present at the events against the G8, at the same time German affiliates were involved in the organising some of the events. DFG-VK was probably one of the most visible. WRI Council member, Tobias Pfluger played a key role as the legal representative responsible for the demonstrations at the Laage airport where all the presidents arrived and also for liaising with the police to get the activists who were arrested free. Other European affiliates were also present in Germany. Forum voor Vredesactie was present with three members. They took part in the blockades of the roads to the fence around the hotel. We believe that there were more people related to WRI that we did not know. One of the challenges that WRI faces is to improve coordination for future events. WRI for many years has worked against the links between war and economics. The G8 the meeting where the 8 richest countries join together to decide together the policies to be taken by the rest of the world is the vivid example of the connection of how war is used to impose economic policies and corporate control. The WRI staff was represented by Andreas Speck and Javier Garate. We arrived on Monday the 4th of June to Rostock, Germany the closest city to Heiligendamm. We used the Rosctock Camp as our main base. We set up our tent in the Barrio of Attack with X1000malquer who have done for several years the blockades against nuclear waste in Germany. 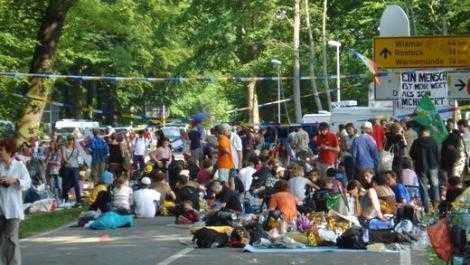 The camp hosted around of 6000 activists, and was an important place to coordinate, prepare for the actions, rest, meet people, have good food, enjoy cultural programmes, share information, train for blockades, etc. On Tuesday we took part in the demonstration at Laage Airport. It took us a number of hours to get there, as first they had said that there were going to be buses and vehicles to take people to Laage, however when we got to the point for taking the transport there was only one bus and a small number of vehicles for the large number of people who wanted to take part of the demo. In the end, it turned out much better to not get on the bus, as later we learned that the bus was stopped and everyone on the bus was arrested. We took a train that had almost more police searching you to get on the train than activists. Later Tobias Pfluger said that this looked completely like a police state. We finally made it to the demonstration point that was 2 kilometers away from the airport, were there were hundreds of people giving a “warm” welcome to Bush. G8 painted tank 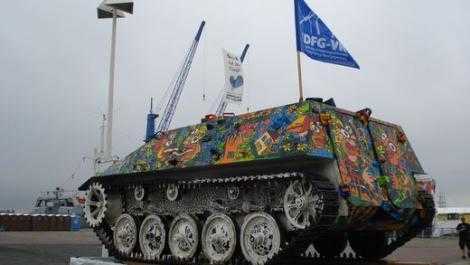 On Wednesday, we made it to the Alternative Summit that was organised by a number of organisations at the same time as the official G8. On Wednesday we took part in one seminar and a workshop dedicated to military bases and economic globalisation. In the first one there were speakers from the Philippines, Russia, Japan and Italy. They spoke about the foreign military presence in their countries and the political strategies of these forces. Later the workshop focused more on campaigns against military bases. Andreas Speck spoke about the efforts in the UK against bases and the need for international networking. Also we had a presentation from the Czech Republic, Italy, Japan. Hans Lammerant from WRI's affiliate Forum voor Vredesactie who presented a plan for an international action against NATO next spring at their Head Quarters in Brussels. Thursday morning, we implemented a workshop on nonviolent resistance in Colombia. The workshop focused on what conscientious objectors face in Colombia as well as nonviolent experiences like the peace communities and the work with nonviolence in the different cities, as an alternative to all the different military groups in Colombia. Later we went to the closing of the Alternative Summit, where a packed church listened to Ester Ceceña from Mexico, Vandana Shiva from India and Sandro Mezzadra from Italy. In the afternoon on that same Thursday, we headed off to the blockades. We visited the blockade of the east side of the fence, were hundreds of people had managed to stop the access from that side, and were blockading/camping on the road. Friday was mainly to take down the tent and to travel safely back to London. During the week at the G8 we discussed future possibilities for WRI at these events. The idea emerged for a bigger coordination around WRI, where we could even think of WRI establishing a Barrio at the camps together with a local host, as well as coordinate the presence of international nonviolent activists to do blockades together. Next year, the G8 will take place in Japan. This means that it will be difficult for many of us to get there, but maybe our friends in South Korea and other countries in the region can take part and organize actions against the meeting. The following year will be held in Italy this will be a great opportunity for a larger scale coordination of WRI against the G8, we hope to work together on it!