Help us keep the Nonviolence Programme 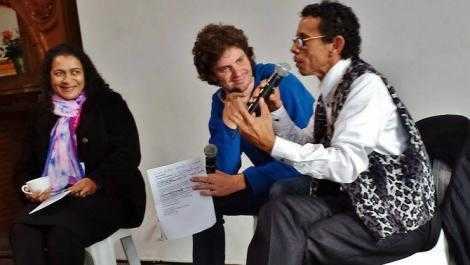 Ten years ago I made one of the best decisions of my life. In Chile, I received an announcement that a position at WRI was opening for work in nonviolence and decided to apply for it. To my surprise – and I think also to that of many others! - I was chosen to be the first coordinator of WRI's Nonviolence Programme. Today I'm writing to you to ask you to help this work continue.

The day I came to work, I was told: “OK, here is your desk. Now you need to produce a handbook on nonviolent action, and launch a global campaign against war profiteering” – all very straightforward indeed.

I came from a conscientious objection group in Chile. In 2003, as a CO, I had attended a meeting of conscientious objectors in Israel organised by WRI, which was the first time I heard of nonviolence training and was my first international direct action - I acted the role of an Israeli soldier who got killed in a street theatre performance. However, many aspects of nonviolence and also of WRI were unknown to me. I quickly learned that WRI was not just an office and organisation. It was a network, a network striving against war and its causes, and deeply committed to nonviolence as a principle for social transformation. What struck me most was that WRI was not just about strong principles, but also about how to turn these principles effectively into action to make change happen.

When I started at WRI nearly ten years ago, the message was that there was funding for two years of the programme. Through a lot of work and also the support of individuals who give to WRI, we have managed to run the programme for these ten years. Again we are at a stage when funds are all but gone, and we need to ask you to support the programme so it may continue to exist.

In these ten years the Nonviolence Programme has had many achievements sharing resources and empowering groups in nonviolence campaigns. The programme published two editions of the Handbook for Nonviolent Campaigns. The first edition was translated into more than ten languages and used by grassroots groups worldwide for nonviolent campaigning for social change. The second edition, which was launched this year in Cape Town, South Africa, highlighted experiences from more than 20 countries on how to organise nonviolently.

These ten years have also seen numerous trainings on nonviolence organised by the Nonviolence Programme. Some trainings have been ad-hoc trainings to prepare for a specific action, such as climbing into NATO's headquarters. Most recently the programme's main effort has gone into empowering regional trainers' networks in Africa, Europe and Latin America. Trainers at the Latin American meeting in Quito went on to organise a joint regional action for the Global Day of Action on Military Spending. These networks provide a unique safe space for trainers to meet and share tools and ideas on how we can best work with groups for social change.

The programme has not forgotten who is profiting from war! Through War Profiteers' News, we report on actions and campaigns to stop the war industry. We organised an international seminar that brought together campaigners on war profiteering from around the world to share the challenges we face and strategies to counter the merchants of death. The new handbook shares the story on a protest against an arms fair in Seoul by WRI's South Korean affiliate World Without War, who took on the action concept used by campaigners in the UK against the DSEi arms fairs. They took direct action and used the slogan “this is not OK”. This is one of many examples of the connections that WRI and the NV programme help to make. 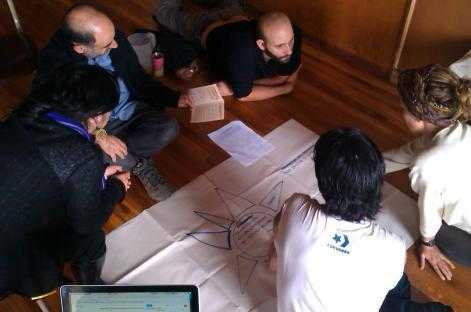 Early next year I will be leaving WRI. I cannot say enough how transformative this experience has been to me, and I have so many people to thank for supporting the work of the Nonviolence Programme. At the moment we are unsure if WRI can hire someone to replace me, as we don't have the funds to cover the position. We have reached the point where we need to make an emergency call for the programme's survival.

So my final goal in these last months is to make it possible for the programme to continue and to be sustainable. Here is when I come to you, to ask you to help me in the mission to make the Nonviolence Programme fully funded. At the moment we are £10,000 short of what we need to be able to hire another worker. Your contribution will help make this possible.

I hope that in ten years time I will still be able to say that I once worked at the Nonviolence Programme of WRI, which keeps on working for radical change.