Fundraising appeal: International solidarity within WRI has been vital to the work of World Without War 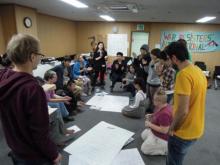 actions against the ADEX arms fair. It has only been two years since we launched our campaign against ADEX, but thanks to international solidarity, significant progress has already been made.

Now I'm asking you to support with your donation WRI's work as the international pacifist network that nurtures this solidarity.

I’m convinced pacifism knows no borders. International solidarity within WRI has been vital to the work of World Without War, and the work of this global network has greatly benefited and helped the work of organisations like ours.

I have been active in World Without War for many years. World Without War is a Korean antimilitarist organisation committed to principles of nonviolence and takes action in support of conscientious objectors and against the arms trade.

Every time we have faced difficulties and challenges, international solidarity has given us inspiration and courage. World Without War started with supporting COs and prisoners and has since widened its activities to campaigning against the arms trade and organising nonviolence trainings. Thanks to WRI, we have grown into a peace organisation with a broader vision and perspective.

Today, the Korean peace movement faces new challenges. The Korean peninsula - divided between the North and South since the waging of all out war in the 1950s - is technically still at war. The North and South Korean governments occasionally reveal a genuine desire to work as mutual partners but for the most part maintain an adversarial relationship which occasionally spills over into military confrontation. Most recently, the relationship between North and South Korea has gone from bad to worse with the rise to power of conservative governments in South Korea and Japan. Japan is seeking to change its “self defence forces” into a “normal” military that can conduct war, and North Korea is using armed provocation toward the world as its primary diplomatic strategy. Added to all this, the mix of relationships with China and Russia complicates things further. The peace and security situation in North-east Asia is under threat. The Korean peace movement is unable to deal single-handedly with this incredibly complex crisis alone.

In this context, the international seminar and actions against ADEX organised by WRI, World Without War, and other Korean peace groups was a deeply beneficial and meaningful exercise. If we are to oppose the internationalisation of militarism, we need to strengthen international solidarity within the peace movement and build international networks of resistance.

I’m confident WRI will continue to perform an important role with World Without War in the Korean and North-east Asian peace movement. As the Korean peace movement needs support from other movements like WRI, WRI also needs your support — and your donation — today.