Webinar: Countering the militarisation of youth: examples of resistance 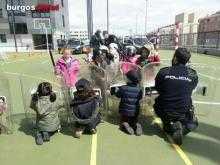 Young peoples' experiences of the military, and exposure to militarist values, differ around the world. In this webinar, we will gather examples from two countries, Israel and Germany, and discuss with activists about their campaigns and strategies to counter youth militarisation in their own contexts. Join us in this webinar to hear from Michael Schulze von Glaßer from DFG-VK (Germany), and Elisheva Gavra and Gilad Ben David from New Profile (Israel) on their ongoing projects and campaigns. If you’d like, bring examples from your own contexts to join us in this conversation.

Michael Schulze von Glaßer, political scientist (M.A.), is author of a number of books about military-recruitment of the Bundeswehr. He is an adviser of the “Informationsstelle Militarisierung” (Information Centre on Militarisation) and deputy managing director of the “Deutsche Friedensgesellschaft – Vereinigte KriegsdienstgegnerInnen” (German Peace Society - United War Resisters). Michael is also a committee member of WRI’s Countering the Militarisation of Youth Programme. More Information: www.schulze-von-glasser.eu

Gilad Ben David is a co-coordinator of the Education project in the last year and a volunteer of the Counselling Network. Gilad is also activist within the LGBTQI community in Israel and within the anti-occupation movement as well.

Elisheva Gavra is a co-coordinator of the Education project along with Gilad Ben David. Elisheva is volunteering as a facilitator with “Igy” - a LGBTQI youth organization and is an activist in the feminism field.

Stop recruiting kids! – The activities against the recruitment of 17-year olds in Germany

Every year the German Army – the “Bundeswehr“ – recruits over 1.300 minors (who are about 10 percent of the yearly new recruits) to hold weapons. Germany is one of the few countries worldwide that has 17-year-olds in the armed forces. Since 2008 the resistance against Bundeswehr recruitment campaigns, and its recruitment of minors, is rising: On the street, in schools and also in the Parliament. This resistance includes not only antimilitarists and peace-activists, but also children’s rights activists. This presentation will show the concrete work against military-recruitment in Germany – with a focus on the political discussion about the recruitment of kids.

Israel has mandatory draft, and the military system is the most dominant institution in public life. There is a constant presence of soldiers and military personnel in schools and after hour programs. In recent years, New Profile has focused the de-militarization work by intersecting the social class perspective to our criticism of militarization of youth. In the last year, the education program ran a pilot in which we cooperated with high schools targeted for marginalized population, aiming on establishing a real alternative to the absolute dominance of military and militant environment in Israel.