Richard Steele, from South Africa, was imprisoned three times in the 1980s for his anti-apartheid activism. During that decade he was caretaker of Phoenix Settlement, Gandhi’s original ashram outside Durban, then worked for the International Fellowship of Reconciliation, also based in Durban. He was an activist in the End Conscription Campaign anddescribes this experience and his experience as a white man conscientiously objecting to the regime of apartheid.

On the 25th of February 1980 I was sentenced by a military court in Pretoria to 12 months in military prison for refusing to submit to compulsory military service. I was 23 years old, and had just finished a BA degree in Psychology and English, and a postgraduate teaching diploma at the University of Cape Town.

I refused to submit to military service because the ethics informing my conscience were based on the principles of respect for life, love, and nonviolence. Therefore, I could not participate in an organisation such as the South African Defence Force, which engaged in violence and killing and trained people in how to do it. I would have taken the same stand no matter which military force anywhere in the world was seeking to conscript me. I was, and still am, a universal pacifist. The ethics informing my conscience also caused me to object to and oppose the violence of apartheid and any institution which perpetuated it. I could see that the SADF was a major instrument in the maintenance of white domination, so my refusal to serve in it was also a deliberate effort to weaken the SADF and so weaken the apartheid government. Finally, I regarded my conscientious objection stand as a challenge to patterns of male conditioning and domination, where the military epitomises and perpetuates an association between masculinity and violence. 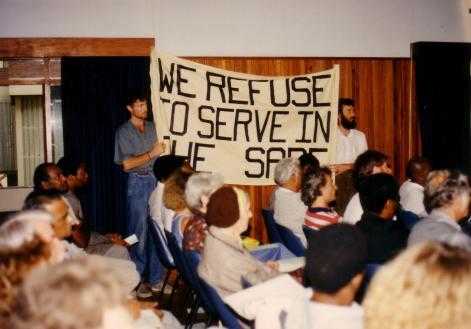 How did I develop my ethics, my conscience? I grew up in Kempton Park near to Johannesburg. My family lived in an all white area, attended an all white church, and my brother and sister and I attended an all white school. However, my parents were 'liberals' and voted for opposition parties in the all white parliament, and taught us to respect all people. In 1975, the year after I finished high school, I went as a Rotary Exchange student to Cortland, New York, where I experienced living in a non-racially segregated neighbourhood and attended 12th grade in a non-racially segregated high school. That year opened my eyes and my mind to a different reality.

On my return to South Africa I went to university in Cape Town. That was the year, 1976, of the Soweto student uprising. I could see that the political reality of South Africa was based on white arrogance and racial and economic discrimination. My first political anti-apartheid action was that year when I took part in a student demonstration in support of the Soweto students. For the next 4 years at university there were many ways in which I developed and implemented my ethics on a daily basis. I made an effort to become friends with black people, and I broke the apartheid laws whenever I could. For example, when I used public transport I rode in the black section of trains and buses.

The big challenge, though, was when I finished university and was called up for military service. It was not difficult for me to see that I should refuse to be conscripted because it was against my conscience to go into the SADF, but was I prepared to face the consequences? Was I prepared to go to jail, and possibly even die there, because of my beliefs? Earlier that year there had been a story in the local papers about a prisoner in the jail to which I would be sentenced, who had died as a result of punishment drill and being beaten by fellow prisoners. I knew I would not cooperate with punishment drill, but had no control over how other prisoners might treat me. I considered leaving South Africa and becoming a political refugee in Zimbabwe or the USA, or Holland or England, but then I thought 'No, this is where I belong, this is where I should make my stand'. So when those call up papers arrived, I sent them back with a letter saying that I refused to accept them. I was then charged, tried and sentenced to prison, as stated earlier.

Prison was hard. Because it was a military prison where all the prisoners were soldiers, I was expected to wear the military uniform and to conform to military discipline such as marching, standing at attention, saluting etc. However, I refused to cooperate with any military activity so I was sentenced to many periods of solitary confinement as further punishment. Eventually, they decided to suspend the additional punishment and I spent the last few months working in the prison gardens. This change was largely due to the volume of local and international publicity about my case and that of Peter Moll who was also in prison with me at the time. Peter is my first cousin – his mother and my mother are sisters, and we spent a lot of time together as children and university students. We were among the first conscientious objectors to go to jail. I recognise that our relative social privilege, as highly educated white young men, helped to attract attention to our case which was protective in a way, and helped generate publicity. My parents were 100% supportive of me, although my father did not agree with my decision to break the law. They visited me regularly, and made numerous representations to government and military authorities regarding my case.

Looking back at that experience, I can see that publicly saying 'No!' to the system of apartheid, violence and male domination, and not being intimidated or bullied into acquiescence by the possible consequences, was very powerful indeed for me, morally and psychologically. I am happy that we ended apartheid, and ended conscription. I am happy to be living in a democracy in which people of all races are at least legally equal. Now I am a homeopathic physician, living in Durban. I am no longer an activist, but I am still a peace worker. Healing work is peace work.

Go to next chapter: Julián's Story