Igor Seke is a member of War Resisters' International's Right to Refuse to Kill committee, based in Mexico.  He is particularly active in countering the militarisation of youth.  Here, he discusses youth resistance to recruitment by armed gangs, and makes the case for considering this a form of conscientious objection, as part of a continuum of war resistance. 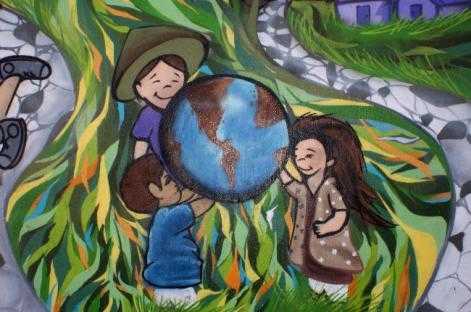 The military is, unfortunately, not the only entity that recruits for war.  In northern parts of Central America, there is a seemingly unending campaign to recruit minors by the violent gangs known as 'Maras'.  The recruitment process consists of trying to bribe the youth, either with gifts, money, mobile phones and other commodities, or by creating illusions of the power and protection they would get as gang members.  Honduras is the country with the highest homicide rate in the world, and Guatemala and El Salvador are next on the list.  The homicides are committed mainly by members of either the Mara Salvatrucha (MS-13) gang, or M-18, another gang.  These highly armed and extremely violent groups wage a war against the entire society, especially against its most vulnerable parts.  The minors they recruit are usually, but not exclusively, from families with low incomes, and are sometimes as young as nine or ten years old.  The gangs force them to execute crimes that include not only robbery and drug dealing, but also murder, sometimes even of their own friends and family members.  In this way, the gangs try to make sure their 'future members' are totally submitted to the gang's power and hierarchy.

However, as the youths of Guatemala, El Salvador and Honduras have learned not to believe the gangs' false promises of power and protection, the gangs have changed their tactics and their main tool of recruitment is now fear.  Once a young boy or girl starts on the recruitment process, sometimes without even being aware of it – having simply done a gang member some favour, for example, or attended a party organized by the gang – it is almost impossible to step back.  Refusing to enlist to the Maras or trying to get out of the recruitment process is very often punished with death.  The Maras won’t take 'no' for an answer, and they surely are not interested in anyone’s reasons – moral, religious, or otherwise – for refusing to enlist into  the gangs.  For many, the only way to avoid this informal 'draft' is to flee through Mexico, if possible to the USA.  Thousands of those who cross Mexico during their migration northwards are granted the refugee status in this country due to the violence, and threats to their lives to which they were exposed in their countries of origin.

When they are recruited by a state military, soldiers are given a uniform: in Central America, when young boys and girls are recruited by the gangs they are 'given' tatoos, a form of uniform that cannot be taken off, ever: everything they ever do inside the gang will be imprinted on their bodies forever.  There are many who try, and there are some, though unfortunately not many, who manage to get out of these armies, but there are also tens of thousands who refuse the 'uniform' of the Maras every year by fleeing, and they need our support and solidarity.  Anyone who believes that everyone has a right to refuse to kill, we should consider all of these refusers to be conscientious objectors.

It is estimated that over 50.000 unaccompanied minors from the northern area of Central America cross the US border every year.1 NGOs working with child migrants are demanding that they be considered refugees, not migrants.  The reason for this is very simple: these minors left in order to escape gang conflict, which in this case is really just another word for war.  We know that wherever there is a war, there is also war resistance and wherever there is recruitment, strategies for evading it are being developed.  Conscientious objection is not a mere legal term, it can also be an act of refusal to kill or be involved in killings, whether directly or indirectly.

This book references international solidarity with conscientious objectors throughout (though in particular at chapter 10).  By providing solidarity to Central American 'draft evaders', those organisations which work with migrants, especially with child migrants who are the most obvious war resisters in this case, are, and should be considered, part of the international conscientious objection solidarity movement, although their work goes beyond the military as it is usually conceived.

Go to next chapter: Building the Alternative