Jungsik Lee is a South Korean writer, theatre director, video artist and conscientious objector who served a prison term from the 25th of February 2010 to the 9th of May 2011. Since being diagnosed with HIV/AIDS on December 9, 2013, Lee's work has focused on topics related to those 'diseases of modern society': alienation, loneliness, despair, and hunger. This personal account discusses the experience of belonging to a sexual and gender minority in South Korea, and of deciding to become a conscientious objector because of that experience.

A note on the content: this is a personal account, which describes traumatic experiences such as social and family exclusion, gender dysphoria, suicidal ideation, medical malpractice, and imprisonment. There are no graphic details however.

I was in wonderland when I was young. Of course, I never fell down a rabbit hole or got lost in the middle of a maze garden. I've only seen a giant bunny and card soldiers in pictures of fairy tales. But this place where I belong is more frightening and weird than the world in which Alice had her adventure. 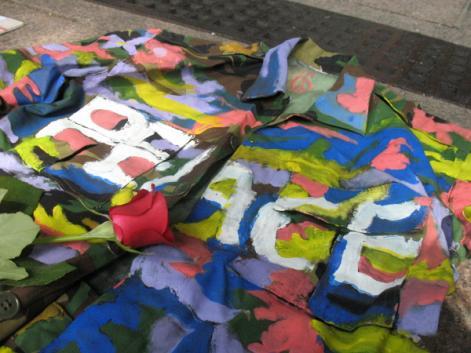 When I was a little kid, I once went to my kindergarten in a green dress of my cousin's, which she used to wear a long time ago. She kept it deep inside her closet. The grown ups laughed at me because they thought a boy wearing a girl's dress was cute. Other boys in the class also laughed because they thought it was funny. I felt a little bit ashamed, but I thought my cousin's dress was really 'me'. I thought a dark skinned boy with short hair looked better in the mirror with girls' dresses on. Why were the clothes I loved girls' and why did those kids have to laugh when I wore them? Why did I love to be told that I was pretty? But I couldn't express these thoughts, and I grew up and went to middle school.

My voice and my behaviour could have been the reasons people laughed at me. I had to suppress and hide myself from the horror of their reactions to me. So I think my everyday life back then might be the weirdest time I've known. That time wasn't enough for me to get to understand my body. There was no one to listen to my agonies about it and my sexual desire. I was estranged from my home and school since I felt I was growing up 'differently'. Some think I opened the door of this society and crossed the borderline. But in fact, my society closed its doors and windows on me: I couldn't show my real face, I couldn't get in.

Even I used to deny my body. When my shoulders, tiny hands and feet grew bigger just like my dad's and uncles', I frequently noticed that there was a penis on my body, which was boys' and men's main target for making vulgar jokes, showing off, and ridiculing others. And I thought I had to change my body when the 'thing' grew hairs and frequently became hard. I wanted to have a curvy, rounded and voluptuous body like my mother and sisters had. I wished I could meet a man some day, with my body like a woman's, and make a family with him as my parents had done

I left home when I was too young. I was on the road and couldn’t stay in one place for a long time. Sometimes I obsessed over extreme thoughts, like a suicide. The thoughts came so often and suddenly from inside of me, they blinded me so I couldn’t even see the sights in front of me. But I found words again after I spent some years in a youth shelter and at my grandmother’s home – the right words, the words I wanted to speak: I love men and I want to be loved by men. Other people's attitudes were the most weird and terrible thing. They wanted to trample on my love.

I wandered for a long time in my teenage years, then I received a notice in the mail that I would be conscripted or 'drafted'. In South Korea, a man who is aged 19 has to have a physical examination by the government. It’s mandatory. The physical examination has 4 steps, which are: psychological inspection, physical check up, aptitude test and determination. These allow people to be classified from Grade 1 to Grade 7. Grade 1, 2 and 3 have to answer the call up. Grade 4 and 5 will do a job at the government's offices as a national service, though they also have to have 4 weeks of military training. And If someone gets a Grade 6, he will be exempted from military service. When I was a teenager I considered a gender confirmation or 'sex change' operation and got counselling from a professor of psychology. At that time, if a man wanted to get a prescription of female hormones, he (in fact, she) had to have an opinion paper of psychological counsel. But the professor dissuaded me and my family relationships were getting worse, so I dropped out of school and moved to a youth shelter, though I also went through a process of physical feminisation at the same time.

After that my depression got worse, so I had counselling and psychotherapy at hospital, where my youth shelter entrusted me. When I turned 19, I had a physical examination, and they gave me a Grade 7. This meant I had to have a reexamination. I presented papers from my counselling and psychotherapy, but the manpower administration gave me a grade 3. So I was classified to be drafted. The army surgeon in charge said I couldn't have a conscription exemption if I didn't have physical feminisation surgery. So he advised me to prepare for the after processes of hormone medication and genital surgery. But I didn't want to choose surgery at that time. I just needed time to understand my sexual identity and to recover from the experience of isolation from my family and society. Then I entered university and delayed my military service – in Korea, a university student can delay military service until the age of 29. A few years later, I dropped out of university. Then I got a notification from the manpower administration again, telling me my date of enlistment and where this would take place.

I was worried. I was worried that someone would laugh at my feminine face and behaviour. And I also worried that I would be a victim of bullying or an outcast of the military base. It was a source of anxiety and horror that I would have to share everyday life with other 'men' and expose myself to men who had different types of bodies.

Some say bad words about conscientious objectors because they think they are 'unpatriotic' and selfish. But when I introduce myself as a sexual minority, they say 'Oh, I feel sorry for you. I don't think a person like you should be enlisted as a man.' Whether I argue or not about the culture of the armed force, what strikes me as most obnoxious about it, even now, as I write, is that this system just has unilateral sway. The administration simply notifies people of their mandatory service, without offering any alternatives or exceptions. I needed time to understand myself. And I wanted to know if I could fit into the armed forces. But this conscription system only gives you the date of enlistment and doesn't listen to the people who have to serve in the armed force. This makes me so angry.

Where is my freedom? What is my obligation and why do we the people always have to do this? Did this state, this society, make any attempt to protect or understand me in my youth? There's no argument to be had about these questions. I simply called the administration and said I would refuse the military service. So I was imprisoned and I had to spend 14 months in a cell. Prison is the place where I had a cold room, where I had to shower with cold water, and where I could only get letters prison officers had already read. I even had to go to toilet under surveillance. Yeah, this place still has so many weird things about it. But I feel I’m back from the adventure called life and in the place I belong. That's one thing I want to thank Korea and Korean military culture for. Now I have an attitude of mind that contemplates the things around me, or those that will be around me,at one or two removes. For this, I am so thankful to Korea. If I go back to my youth by accident, like a miracle, I think I can proudly ask my friends and the older folk as I wear my cousin’s green dress: am I pretty in a girl’s dress? Don’t you think this is really 'me'?

Translated from Korean by Akhee Ahn.

Go to next chapter: Idan's story