It was a religious initiative, SERPAJ (the Peace and Justice Service), founded in 1974 in Colombia, which was responsible in many Latin American countries for promoting values such as active nonviolence, a culture of peace, and the idea of conscientious objection as a right which ought to and could be demanded of the authorities. Many of the initiative's offices, for example those in Ecuador, Colombia, Chile and Argentina, were the driving force behind the establishment of local conscientious objection movements, but it was in Paraguay that the initiative made the most significant advances: in 1992, the members of this branch managed to ensure that the Paraguayan constitution should formally recognise conscientious objection in one of its articles. The next year, the first Paraguayan conscientious objectors declared themselves as such, gaining media attention and managing to disseminate their message. 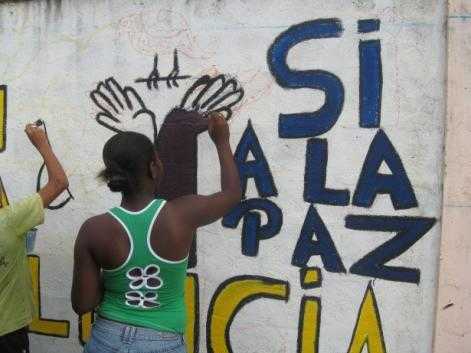 In 1994, the first Latin American meeting on conscientious objection took place in La Asuncion, and the Latin American and Caribbean Network of Conscientious Objection was established, which, even before the days of the internet, managed to coordinate activities in several countries and edit the magazine 'Objecting'. The network's different groups enhanced the subject matter with which it dealt to cover a broader critique of militarism, such that with time, the network became the Latin American Coordination of Conscientious Objection, which existed until 2004. There are several reasons for its decline thereafter. The first is that many countries, across the continent, banned forced military recruitment raids or 'press gangs', which were the primary target against which activists had mobilised. They also allowed for conscientious objection in various laws. The autonomy the network wanted to maintain from NGOs also left it with few economic resources for carrying out campaigns and organising meetings. Since 2005, War Resisters' International (WRI) has attempted, with relative success, to promote an antimilitarist network in Latin America, calling for meetings, joint declarations, and trainings for nonviolent direct action.

Three main tendencies developed within the Latin American conscientious objection movement: the religious tendency, the anti-imperialist tendency, and the anarchist tendency. SERPAJ and various NGOs represent the first, which forms part of a plethora of initiatives which fall under the rubric of 'liberation theology' and in which the objection is based on the commandment 'thou shalt not kill'. The anti-imperialist tendency was formed of broadly Marxist groups, which refused compulsory military service for tactical reasons, but supported the notion of a 'popular army' as much as they supported the national liberation struggles of the guerrillas. These groups were particularly active in denouncing the presence of North American military bases and the North American military school which trained a majority of Latin American top military brass (the higher ranks of Latin American militaries). The third tendency, with fewer adherents but an integral analysis of militarism and its consequences, were the anarchists, who rejected the proposition of an alternative civilian service to the state, but who were prepared to enter local coalitions which confronted concrete manifestations of militarism in every day life. Among the anarchists were to be found the punks, whose bands and fanzines helped disseminate the movement. Women were a minority in all three tendencies, and feminist critiques of the military received little attention. One shortcoming was that, despite the 'opportunity' represented by the separation of mothers from their sons due to compulsory military service, few women took part in the initiatives in their capacity as mothers and grandmothers.

The debates between anarchists and anti-imperialists, according to context, were tense within the conscientious objection movement. One bone of contention was the Cuban government. Another was support – or rather, the impediment of criticism, which is also a form of support – for guerrillas such as the Armed Revolutionary Forces of Colombia, Shining Path, and the Sandinist National Liberation Front, as well as the relationship with leftist political parties. In 1994, the emergence of the Zapatistas' National Liberation Army in Mexico brought the debate about the nonviolence/ armed struggle dichotomy to the fore. The anarchists rejected the notion that 'bad' militarism only emanated from the Unites States, in contradistinction to a potentially 'good' militarism of the left. Rather, they affirmed that the army, by its very nature, was a synthesis of negative values which they rejected: obedience to authority, hierarchy, xenophobia, machismo, homophobia, the valorisation of force, etc. It was for this reason that when a militarist 'of the left', Hugo Chavez, took the presidency of Venezuela in 1999 and became a point of reference for Latin American anti-imperialism, communication between anti-imperialists and anarchists became fraught. However, a faction of anarchism in Latin America today questions the peace culture of the conscientious objection movement and advocates 'spontaneous violence' and the 'social warfare' of so called 'insurrectionalism'.

In Latin America, antimilitarism as an identity has never had its own development, separate from the three tendencies described above. Participating in a political meeting and describing yourself as an 'antimilitarist' can lead to one of two things: you will either be looked at like an alien from another planet, or you will be met with the prejudice that being a pacifist surely means not believing in anything, not wanting to get your hands dirty or having to deal with 'problems'. It has never been easy to promote antimilitarism in a continent where the model activist for social change is the patriarchal figure of 'Che' Guevara. After the abolition of compulsory military service in many countries, many thought that antimilitarism had already achieved its objectives, however the integral critique of what the military represents, as a weapon of domination, should continue to have currency in movements for social change today.

Translated from Spanish by Elisa Haf

Go to next chapter: Richard's Story