Disability and Conscription: masculinity, (dis)ableism, and the militarised body in Turkey

Bülent Küçükaslan was born in 1973 and lives in Istanbul. He has been a wheelchair user since 1999 due to a spinal cord injury and founded the Engelliler.biz web based platform (www.engelliler.biz) on disability issues in 2003.  He is the administrator and managing editor of this platform, with almost 80,000 members.  He contributes to the disability movement in Turkey through such work, as well as through his essays and other forms of activism on disability.  Here he writes about the intersections of (dis)ableism, militarism – in particular conscription – and masculinity in Turkey.

One of the career paths that most decisively idealises the human body is the military.  Certain terms, produced to appease those who are keen to engage in masculinist language patterns, such as 'to be harsh', 'to be alert', 'to be a man', 'to stand up straight', 'to obey orders', 'to not waiver', 'to not feel pain', 'to not feel sick', 'to not sleep', 'to not tire', are particularly presented as the building blocks of the military – despite the fact that these  words are simply part of anyone’s life, and not the special result of military activities. 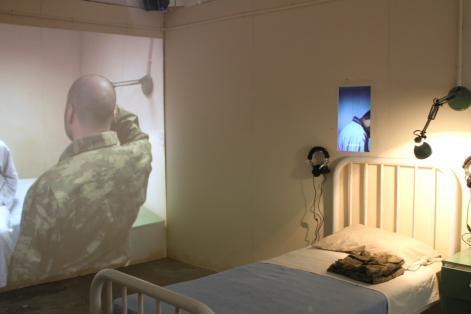 The imaginary construct of the ideal, militarised male body is particularly plain to see in the sixth article of the health management guidelines of the Turkish armed forces: 'those charged with entering the military via the route of mandatory conscription will be split into two groups: those who are and those who are not suitable to serve in the military.  Those who are deemed suitable cannot have any illness or deficiency when it comes to their health'.

In other words, the military might as well hang a big sign over its entrance gates saying 'no disabled persons allowed here'.  This issue is not worth worrying much about in and of itself, however the fact of the matter is that it is not only those who want to pass through the proverbial gate who are subject to this gatekeeping – that is, those who want to serve in the military – but every last young man in Turkey (regardless of the obvious health concerns relating to disabled people).  What makes matters worse in such cases is the fact that where the disabled are concerned, they clearly won't ever be able to meet the requirements to get into military service and pass through the gate, but a whole labyrinth of conscription examinations nonetheless continues to beckon every last potential conscript regardless of their health, creating nuisances and injustices for many.  In this regard, there are two groups of people with disabilities, whose experiences with the military are well worth examining: 1) those who wish to join the military  and 2) those who don’t.

However, if the same person were to express a lack of interest in serving in the military on the sole account of their actual disability, everything would go the opposite way.  In that case, no matter how much this person might wish to be exempted from the military, and no matter how much they might emphasise their disability, they would likely be faced with the accusation of trying to shirk the responsibilities that they are charged with by virtue of their masculinity; they will likely suffer the danger of being accused of trying to run from their duty, which comes with heavy consequences, such as suffering the pains of a bureaucratic quagmire, going into great financial expense, and losing lots of precious time while waiting for a final result.

At the first stage, this person would have to officially declare that they have a 'disease or deficiency', after which they would be sent to a military hospital.  These hospitals may well be in other towns away from the person’s hometown, in which case transportation and accommodation costs would have to be paid by the affected individual.  Then the person would most likely be sent from one doctor to the next, just to assert their disabled status, often being subjected to rudimentary physical tests, and would finally be sent away to await the results of these examinations, hoping to successfully have convinced the health board of their condition.

In Turkey, even those with heavy disabilities are likely to be subjected to such procedures.  It is left to the citizen to prove that they are indeed 'deficient' by suffering all of these tortures.  But even living up to this expectation isn’t enough – the final report given to disabled persons who successfully manage to convince the board of their disability is not a plain dismissal of the case – it is actually a so called 'rotten report', which will continue to provide future problems to such disabled persons, for instance when looking for employment.  This is especially true if the disabled recipients of these reports don’t have any outwardly noticeable disabilities, when they may also be suspected of being gay or bisexual and have to face the prejudice that comes with that suspicion.

In other words, you can’t win whether you do want to serve in the military or you don’t.  But the biggest loser in this game is the person who carries the scarlet letter of the 'rotten report', trying to find a footing in professional and social settings.  One way or another, every disabled person will unfortunately get a taste of what it’s like to 'serve'.

Go to next chapter: Conscientious Objection in Israel: dismantling the master’s house with the master’s tools?