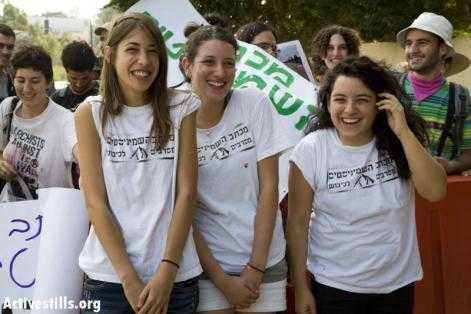 Sahar Vardi is an Israeli Contentious Objector who publicly refused military service and was imprisoned for this stance in 2008.  Since then she has been active with Israeli antimilitarist groups such as New Profile and today works as the Israel Programme Coordinator for the American Friends Service Committee, based in Jerusalem.  She asks whether conscientious objection in Israel is an attempt to dismantle the ‘master's house’ of militarism using the master's tools –  tactics which gain their power from militarism itself.

All of these reasons which young people list for their decision to object to the compulsory military service forced upon them can only be heard, and receive public attention, due to conscription or 'the draft' itself, an issue I will further explore below.  These youth receive a stage for their protest, because they are willing to pay a price for what they believe in by refusing to serve in the military and, in many cases, are imprisoned as a result.  In this way, conscientious objection in Israel is often a tactic of resistance, not to military service, but to a bigger political or ideological issues, with the act of refusal acting only as a platform.

When it comes to the movement for demilitarising Israeli society, conscientious objection has been seen for years as one of the main tools in this struggle, and possibly one of its foci.  Since its establishment in 1998,the biggest feminist movement for the demilitarisation of Israeli society – New Profile – has focused much of its resources on the support of conscientious objectors (both public ones who are consequently imprisoned, and conscientious objectors who prefer to get exempted on mental health grounds, which is the easiest way out of military service).  The other side of this coin is that conscientious objectors themselves have been concentrating more and more on countering militarism as one of their reasons to refuse military service, as can be seen in the 2014 refusers' letter against the occupation: 'the problem with the army does not begin or end with the damage it inflicts on Palestinian society.  It infiltrates everyday life in Israeli society too: it shapes the educational system and our workforce opportunities, while fostering racism, violence and ethnic, national and gender based discrimination'.1   But this link between countering militarism and conscientious objection, though it seems obvious, is one that needs to be reexamined, and introduces many dilemmas for our movements.

In 2001, dozens of young Israelis, both men and women, wrote a public letter declaring their refusal as a form of resistance to the Israeli occupation of the Palestinians.  As a result, dozens of young men were imprisoned, five of them for almost two years each.  Most of the women in the group were recognised by the military as conscientious objectors and received exemptions on these grounds, finding themselves in the role of supporting the imprisoned boys.  On this, Shani Werner, one of the women in the group, wrote: 'it’s precisely as easy for us to ignore women’s draft resistance as it is for the Israeli Defence Force (IDF) to ignore women’s military service.  If women’s service in the army is seen, in any case, as desk work and serving coffee, and given that the IDF allows girls exemptions from service relatively easily, our resistance is treated like “coffee serving resistance”, which even the army accepts'.2

The Israeli conscientious objection movement has become more and more aware of this tension, understanding two conflicting realities: on the one hand, conscientious objection is an extremely powerful tool, which manages to bring issues to public discussion; on the other hand, conscientious objection is a tool within the framework of the military structure, and relies on militaristic values.  Israeli conscientious objector Udi Segal, imprisoned in 2014, referred to this: 'I chose to go to prison because, unfortunately, the Israeli public discourse listens almost only to those willing to sacrifice themselves.  Those willing to "pay the price”'.3 In November that year, at the age of 19, he ended a short hunger strike, which he had started during the 5th prison term imposed upon him for refusing to serve in the Israeli military.  In his decision to stop his hunger strike he addressed this tension again, stating: 'it turned into a power struggle, and I’m not interested in proving my strength or my “masculinity”, in their language – that is the essence of my refusal'.

This is a good example of how being aware of this tension, being part of a movement that sees its own weaknesses and contradictions, allows conscientious objectors to find a middle ground and, in their statements – which receive a platform because of the military structure – to problematise not only  military service itself, but the fundamental values of militarism.  I believe this middle ground, which includes both the 'masters tools', but also our ability to make new use of them and challenge the tools themselves, allows us the space to combine the effectiveness of conscientious objection with deep antimilitarist work, which our society is desperately in need of.

Go to next chapter: Conscientious Objection Beyond the Military