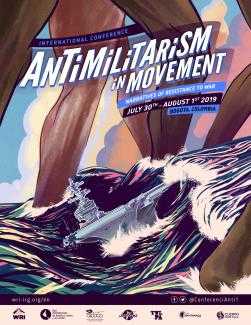 The International Conference Antimilitarism in movement: narratives of resistance to war seeks to raise the profile of collective experiences of resistance to militarism, and develop alternatives to the growing militarisation in Latin America countries and globally. The conference will gather groups, organisations and individuals to share and build action strategies, rooted in nonviolence and antimilitarism. The event will take place in Bogota, Colombia in July and August 2019.

On the first day, the plenaries will focus on the analysis of the meanings and experiences of the militarization from a local (Colombian), regional (Latin American) and international perspective.

In the afternoon, participants will initially choose one of three theme groups: Just peace, Sustainable peace, and Diverse peace. Each theme group will provide opportunities to discuss specific subjects in more detail, as participants are guided through a range of exercises by facilitators.

The first theme group session will focus on context mapping, coming to a shared analysis as to what “militarism” and “militarization” means.

Our morning plenary session will be an opportunity to hear stories and experiences of resisting militarisation, again from a local, regional and international perspective.

In the afternoon, participants will meet in the same theme groups as on day one. This time, the focus will be on mapping our allies and exchanging experiences of resistance, looking for opportunities to build new alliances and for collective action.

The day will start in our plenary groups, with a focus on building shared action agendas to be presented back to the main plenary.

The final plenary will be an opportunity for theme groups to present the work they have been doing, share learnings, and plans for future work or action.

War Resisters' International, as a network of anti-militarist and pacifist organisations, has sought to make militarisation in different parts of the world visible, creating connections through events and actions, initiating nonviolent campaigns that actively involve groups and local people, and building solidarity and support for those who oppose war and challenge its causes. WRI has also organised gatherings of activists from different regions in international meetings, most recently at the "Small Actions, Big Movements" conference in Cape Town, South Africa, in 2014.

Likewise, in Latin America, the initiatives to broaden the perspective and position of antimilitarism as a nonviolent social movement led to different organisations gathering on a regional platform to achieve a greater impact and reach of the initiatives that from the region have been resisting the impacts of militarism. This platform, called the Antimilitarist Network of Latin America and the Caribbean (RAMALC) is a space for collectives from Latin American countries to converge. Over the last 4 years, RAMALC has concentrated its efforts in producing contents to critique militarism in the region in its magazine Rompiendo Filas, as well as in developing Latin American meetings for demilitarization, focusing on training in Nonviolent Direct Action and the problematization of militarization in the region.

Following the signing of the Peace Accords between the Colombian government and the Fuerzas Armadas Revolucionarias de Colombia (FARC - Revolutionary Armed Forces of Colombia) in June 2016, Colombia is presented with opportunity to question the different forms of militarization occurring in the country, and how these relate to the different forms of violence and exclusion Colombian people face. We are also presented with the opportunity to consider the experiences of resistance, that have been silenced in the midst of the internal armed conflict, which has involved different legal and illegal armed actors. Many of these groups have reorganized and now pose a significant challenge to  the Peace Agreement signed between the national government and the former FARC guerrillas, who are now an established political party.

A new right-wing government came to power in May 2018, which represents social and political sectors that have resisted a negotiated solution to the armed conflict, and represents a challenge, including a resurgence of political persecution of civil society leaders and organizations that defend the rights of their communities and territories.

However, far from being a situation particular to Colombia, this is a reflection of what is occuring in many other countries in Latin America and around the world. The advance of warlike governments, policies disguised as peace speeches, the extraction of resources that affects local communities and the environment, the extensive investment in armies and weapons, and the recruitment and militarisation young people, are all expressions of the increasing militarisation of lives, bodies and territories in many place in the world.

Antimilitarism in movement aims to a gather experiences of nonviolent and antimilitarist resistance from around the world, to allow critical reflection on the forms of the militarization of life, bodies and territories, raising the profile of the diversity of proposals and social alternatives, and creating space for developing local and global actions for the construction of just, diverse and sustainable peace.