This week the Eurosatory arms fair is taking place in Paris. The 'Defence and Security' fair, one of the largest in the world, takes place every two years. For many years, opposition to Eurosatory took the form of one woman, Yvonna Kressman, faithfully standing outside on her own, over decades. Gradually the word has spread, and this year campaigners from Germany, England, Belgium and the Netherlands joined French antimilitarists and others to make sure it wasn't “business as usual” for the arms trade. 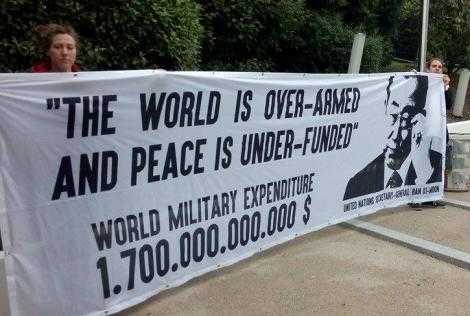 On the opening day of the fair, over forty activists thronged the entrance singing songs, chanting, holding banners, flags and passing out leaflets. We could not be ignored!

They were from a variety of groups including Quaker, Mennonites, the French Palestine action group and the Mwasi Collective (an Afrofeminist collective). 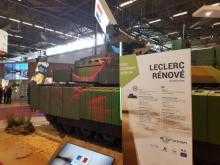 Action group Les désobéissants, along with WRI members from Agir Pour La Paix in Belgium, registered as attendees and, having got into the fair, threw “blood” (red paint) and tanks and dropped banners. They were arrested. See some news footage of their actions here (in Spanish, German, Italian, French and English).

All week, activists were a thorn in the side of the fair. Each day is seeing protests outside the fair, an on Monday there was a public event in central Paris to raise awareness of Eurosatory, which is not well-known in the

city. Responses were generally very supportive, and disturbed that they had not previously known it was there.

On the second day, I arrived very late and found myself alone outside the conference centre. For a moment I thought I'd turn round and head back to the city. Then I spotted Giselle, who turned out to be an elder of the Paris branch of the Women's International League for Peace and Freedom.

With my retro banner and Giselle's knack for starting conversations, we decided to join forces (as it were) and stood together outside the exit as (I think) over a thousand arms dealers, armed forces, buyers, sellers, lobbyists, security and police filtered by.

We got hold of a copy of Eurosatory's daily newspaper. with a front page story entitled 'Egalité and fraternité', the contents weren't much better. It included stories about 'environmentally friendly' missiles and had a two-page spread about a tank manufacturer: pictures of different tanks under the headline 'Meet the family'.

On Tuesday night, the arms dealers were due to attend their reception dinner in central Paris. We were there to meet them, with a presence and the exit to the Metro station where they arrived, and at the entrance to Cultural Centre they were headed to.

The arms trade presents itself as neutral and inevitable: it is neither. Arms fairs are a chance to show our opposition to those who work in the trade directly and to raise awareness of war profiteering in the local area. Have a look at the Omega Research Foundation's map of military, police and security fairs to see if there is one near you, and write to warprofiteers@wri-irg.org if you want to discuss your actions.

Voice your support for the Eurosatory protesters on social media using #EurosatoryKills.