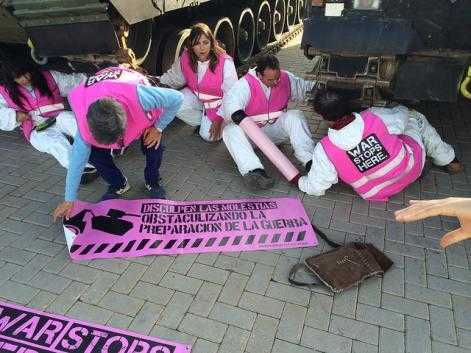 Last Friday, a group of Antimilitaristes-moc activists disrupted the organization of the departure of a military convoy from the port of Sagunto, due to be deployed in war maneuvers in the next few days by army units of more than 30 countries as part of NATO exercise “Trident Juncture 2015”

Last Friday at 17:00 a group of antimilitarist activists, dressed in white overalls and pink reflective vests assembled at the dockside of the port of Sagunto, Spain, where a cargo vessel with vehicles and arms had been being unloaded recently, in preparation for live fire stage of the multinational NATO military maneuver “Trident Juncture”, due to begin in the next few days. While two activists unveiled banners with the words “War Stops Here” and “Sorry for the inconvenience: obstructing war preparations”, four more activists rapidly chained themselves with lock-on tubes to the tracks of two Danish Leopard tanks parked due to be transported to the main maneuver field of San Gregorio (Zaragoza).

For three hours the activists remained locked to the war machines preventing their departure, despite of the growing police pressure. Finally, two riot units of the Guardia Civil showed up at the place and managed to remove the activists from the three lock-on tubes by cutting off the retaining nuts using a portable radial saw. After 30 minutes of work, once released from the tubes, the 6 antimilitarists were arrested and transfered to the Guardia Civil police station in the nearby town of Puçol, where they were released at around 11PM. Four of them are accused of charges of "Breach of the peace" and "Disobedience". This does not exclude the possibility of further prosecution through the recently passed Public Security Law ("Gag Law").

The main motto of this action of civil disobedience is “War Starts Here, and Here we Stop It”. With this action, the anti war group denounces that “military aggressions as a scandal to public opinion are the fruit of political decisions taken thanks to our conscious or unconscious consent, and these maneuvers provide a perfect example of war preparations”.

According to Antimilitaristes-moc, “the Trident Juncture exercise supposes the taking over and use of ports, airports, rail lines, and natural areas in Sagunto, Valencia, Zaragoza, Albacete and various areas in Andalucía in order to perform war training to assure the offensive and interventionalist capacity of the NATO Very High Readiness Joint Task Force, and prove its destructive power”. According to Antimilitaristes-moc, another example of politics which prioritise war preparations is “the immense volume of military spending (around 18,000 million euros in Spain annually and over 1,000 bilion globally) from our taxes, or the arms trade in and with conflict zones: the Spanish state is among the 7 mayor world arms exporters, the permanent members of the UN Security Council making up the main arms exporters.”

They conclude “The consequences of these military policies of NATO, of Russia and its allies, are much more visible to public opinion: The systematic violation of human rights, the destruction and persecution of the civil population, extreme violence against women, the expoliation of resources, and the mass exodus of millions of people from countries such as Iraq, Afghanistan, Libya, Syria, Ukraine, etc.”

“We wanted to stop the flow of material and personnel to these war games and at the same time make visible the contrast between the terrible situation of war refugees who seek protection and meet walls, razor wired fences and death, and the absolute freedom of movement for those who execute wars and their arms, especially during theses military exercises”. For the antimilitarist collective, “actions like those of today contribute to making a culture of peace based on cooperation, justice and non-violence, and not one of deterrence and force”. The paradigm of defense and military-based security has to be changed, it leads over and over again to war and violence. “Human security, according to the UN definition, puts at its axis the defense of the rights of people and nature. In this new paradigm, “armies and military structures are a threat to these rights and must be broken up and abolished”.

On the other hand, Antimilitaristes-moc, wish to express through today’s action their rejection of anti-liberty laws which criminalize social protest, laws passed recently by the Spanish government, such as the reform of the Penal Code and the Citizen Security Law (gaging law). Antimilitaristes-moc have declared that they will carry on using civil disobedience tactics, “because we consider them a legitimate and radically democratic tool for political participation and social change.

For Antimilitaristes-moc, this is a “non-violent direct action”, like similar actions carried out over the last 10 years, like the “citizen inspections” at the NATO Response Force base in Betera (Valencia). According to Antimilitaristes-moc, “It’s direct, because we use our bodies as tools, without mediation or representations. And it’s non-violent, because we believe in the higher legitimacy and efficiency of nonviolence to bring about social change. Coherently, we act against violent institutions without presenting a threat to life or the physical integrality of other people”.

Antimilitaristes-moc is a grass-roots, pacifist group based in Valencia that promotes nonviolent direct action and civil disobedience as tools for social change and works for the abolition of the military as a way of getting rid of war. It is part of the statewide network “alternativa antimilitarista-moc”, the European Anti-militarist Network and the War Resisters' International .