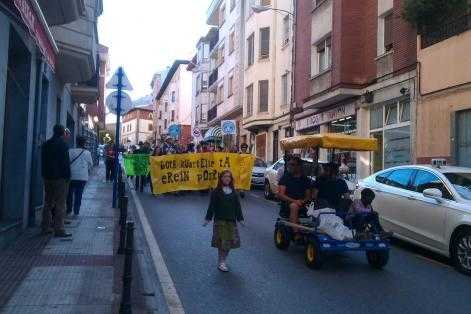 Trident Ploughshares received the call-out to to oppose the Trident Juncture military exercise and decided to take part. After all, it was the biggest NATO exercise for 10 years, was about intervening in Africa and included a large contingent of UK military forces. The UK Minister of Defence was to visit the UK forces and it seemed right that UK anti-militarists should support their Spanish colleagues and explain that we, as global citizens, were against NATO and his visit was not in our name. We also wanted to support and strengthen our European network.

Four of us travelled by car and ferry and drove down through Spain and two took a plane from Scotland and then local buses. All 6 of us from Trident Ploughshares reached Barbate in time to join a local meeting where we learnt about the local situation and also gave a short talk about our UK actions and heard from the Swedish contingent (four persons). We all showed our support for the local struggle that aims to recover the land and sea taken from the local farmers and fishermen for military exercises.

The next day we joined a 2 thousand strong local march (mostly from the small town of Barbate) against the exercises taking place and saw for ourselves the beaches which were out of bounds to locals and spattered with soldiers, the seas controlled by warships and submarines with local fishermen denied access to their fishing grounds. We walked 6 kilometres to the main gate of the exercise area and listened to local speakers as they held their rally there and then walked back.

The next day we prepared for our entry into the prohibited exercise area with our Spanish and Swedish colleagues, many of whom we had met previously at Faslane and Burghfield in the UK, at Lulea in Sweden, in Lisbon, Portugal or in Las Palmas, Canary Islands, Spain. The weather was atrocious with huge downpours that left deep puddles that we had to wade through - in fact it never really stopped raining the whole time we were in Barbate - I am glad that we were not camping!

Our European group of anti-militarists went in a convoy of cars to the northern entrance of the huge exercise area, walked through the gate and set up banners, painted on posts and paths and occupied the space for an hour or so. It was obviously not of concern to the military as they ignored us and so as the group had decided not to explore the exercise area or move deeper through it and after a particularly huge downpour, during which we took shelter, we decided to go to the southern entrance which was the main entrance where we had demonstrated two days previously.

We arrived and, finding the gate open, walked straight through and approached the military buildings where we were halted and told to go away. We sat down with our banners, a group poured red paint over themselves and there was a stand-off for an hour until the Guardia Civil turned up to evict us. Unfortunately they were rather vindictive and used pepper spray on several of the protesters, confiscated two cameras and took away 2 mobile phones. Mine was taken away and when I eventually retrieved it from the local police station I found the photos had all been deleted! I complained it was a criminal action as they had deleted vital evidence of our treatment, but they were unconcerned. We hope our local Andalucian colleagues will do a complaint about the treatment and regain possession of the cameras that had still not been returned at the end of the next day. No-one has been charged yet although names and details from ID cards and passports were noted.

The next day most people departed but the 4 of us in a car had been invited to Zaragoza to share information and support their week of action against the exercises. We took part in a march and human chain in the centre of town and also shared information about the European Network and our various actions. 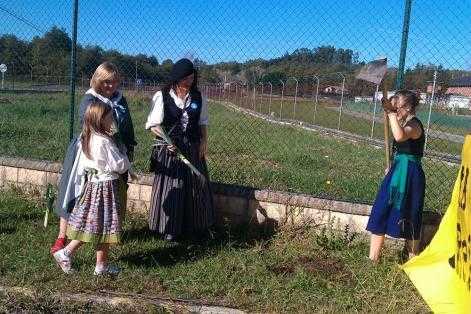 We also had time to enjoy the Roman remains and the amazing Cathedral in Zaragoza before we moved on to Bilbao. After 20 years of protesting against conscription and winning that particular battle and of course within the context of Basque resistance against Franco and military control, the local anti-militarist group here is very strong. We joined in a march of around 5 kilometres against one of their local military bases in Murgia. It was amusing and consisted of dressing up as local peasants planting leeks (the area of the base used to be a market garden and farm) with others dressing up as soldiers. The shared meal at a local restaurant afterwards cemented friendships.

We learnt a lot whilst in Spain, deepening our connections, and now feel that there is much more we could do to strengthen our resistance to the military in Europe by working together. We especially feel that much stronger resistance actions could be planned making use of seasoned activists from our various countries who are willing to risk the consequences. We can now go beyond supporting demonstrations and marches and take part in major resistance and disruptions, fitting them into local strategies.