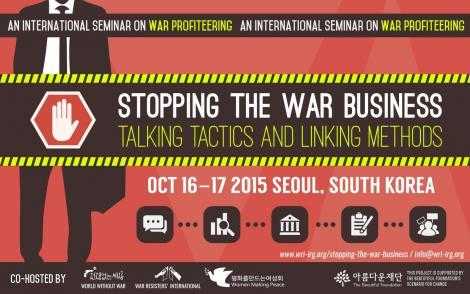 The Stopping the War Business seminar was held in Seoul, Republic of Korea, on 16 and 17 October, 2015. It was co­hosted by World Without War and War Resisters' International. The seminar provided space for learning about effective tactics used to challenge war profiteers around the world, and forged relationships between campaigners that will inform and enable new campaigns from here onwards. Activists from 21 different countries took part, with 70 participants in total (30 internationals, and 40 Koreans).

Quote from the evaluation: 'I came back with a big bag of knowledge and experiences from different regions that I would very much like to spread the information in my country'

After the seminar, a nonviolence training and then action against the ADEX arms fair took place. The seminar and the actions were deliberately linked, in order to support local activists in their struggle against a local example of war profiteering, and to put the learnings and relationships built up during the seminar into action.

The seminar featured speakers from many different campaigns against war profiteering around the world. These included: 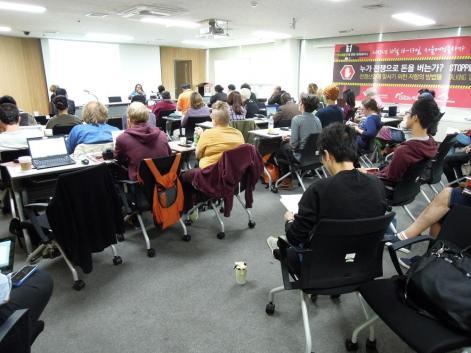 The seminar was also heavily participatory, creating opportunities for skill­shares and
discussions of tactics.

The workshops included:
• Repression of protests and militarisation ­ - identifying riot contol weapons lead by The Omega Research Foundation, Britain
• Using direct action against war profiteers lead by Mohannad Darabee from the  International Solidarity Movement in Palestine, and Bokhee from the campaign against the US naval base on Jeju Island, Korea
• Researching war profiteers lead by Wendela de Vries of Stop Waffenhandel, the Netherlands
• Strategic campaigning lead by Sarah Waldron and Sarah Reader from Campaign Against Arms Trade, Britain
• Using legal mechanisms to challenge war profiteering: focusing on the South Sudan arms embargo lead by Moses Monday John of the Organization for Nonviolence and Development, South Sudan

The seminar also gave space for 'campaigns clinics' when smaller groups gathered to discuss the work of a campaign represented at the seminar. The rest of the group had the opportunity to ask questions, offer insights, and develop creative and supportive criticism as to how the  work could be built on.

These campaigns clinics focused on:
• 'Hamushim' (Armed in Hebrew) – the campaign against the arms trade, from Coalition of Women for Peace in Israel
• Nonviolent organising and land rights, from the National Land Rights Forum, Nepal
• Aktion Aufschrei, a network of groups campaigning against arms exports in Germany
• The campaign against US military bases in South Korea, from the ANTHRAX campaign group
• the Mozda Collective: Fighting nuclear power in India 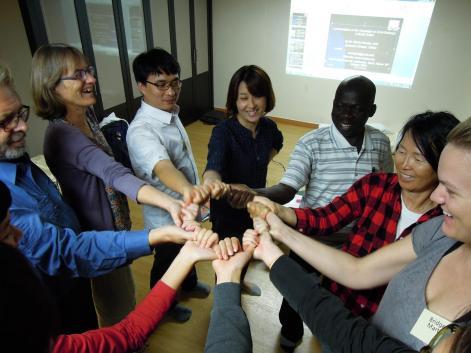 Quote from the evaluation: 'It made a huge difference to how linked in we feel with the international movement. Lots of tangible outcomes e.g. sharing information and campaigns over social media and email.'

Beyond the formal sessions, there were great opportunities for networking and socialising informally, which forged relationships that will continue beyond the event. Such mutual understanding and solidarity is one of the foundation blocks of capacity­building. The final session of the conference included a discussion of follow ups to the seminar. It is clear that many 'bilateral' connections were made which will bear fruit in future, with individual groups campaigning with each other. More broadly, WRI's existing networks working on war profiteering will now be stregthened by this new input of people and energy: even those not able to attend this seminar, but already in contact with WRI and working on these issues, will be spurred on by the impacts of the meeting. For example, soon after the seminar, activists in Wellington, New Zealand, were taking action against the Wellington Defence Industry Conference. Although no one from that campaign was present at the seminar, many seminar participants took part in an online campaign against the Wellington conference, having found out about it through a participant who spread the word. 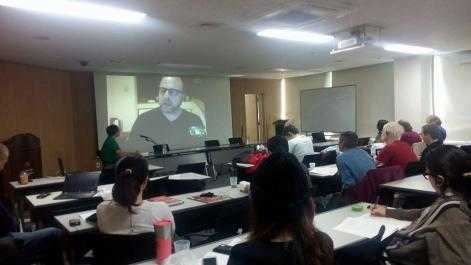 An effort has been made to spread resources from the conference beyond those attending. All the plenary speakers from the seminar were recorded; these videos will be uploaded to the WRI website and made available for free to everyone. Additionally, the reader for the Andrew Feinstein giving a presentation via Skype conference (containing introductory article from the various speakers) will be used as an edition of WRI's magazine, The Broken Rifle.

We also linked up activists on war profiteering with other local campaigns in Korea. Most significantly, this included work to support conscientious objectors (CO) and for CO rights to be respected in Korea. Five participants visited a CO in prison near Seoul (the prison term for COs in Korea is 18 months); on return home, many participants sent letters and postcards to imprisoned COs in Korea on 1st December (Prisoners for Peace day).

Unfortunately one of the speakers, Andrew Feinstein, could not join us at the last minute due to ill health. However, happily we could arrange for his presentation to be given by Skype link. He was also able to take questions, and his details were shared with the group so that further
contact could be made.

Following feedback from the evaluation survey, in future we would make a more formal space for participants to share their work, in addition to the campaigns clinics. This might take a visual form (for example a noticeboard with photos on), or more whole­group introductory sessions in which every participants says one or two words to introduce their interests and expertise.

The evaluations indicated that this sharing did happen informally, and many participants could speak in plenary or workshop sessions, but it would be good to have a space that would ensure
that participants could have a chance to do this. 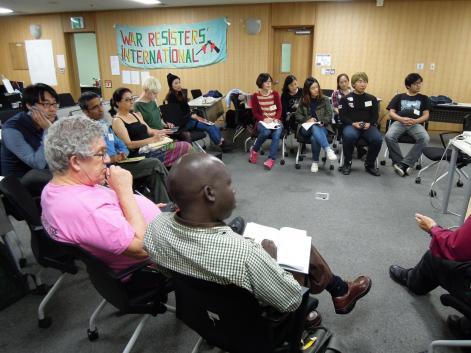 Quotes from the evaluation:
I was asked to tell what I'll take home from here. To conclude, the list is simple: I will take home a little bit wider understanding, ideas for common action, solidarity, and – once again – hope.


South Korea has the world’s 10th biggest military expenditure and is the 9th biggest importer of weapons...The international seminar on war profiteering was meaningful in that we could explore effective ways to challenge those businesses together. The seminar was participatory rather than just a panel discussion, which is to be lauded... I learned many new things. I could understand more about the current situation on arms trade worldwide, who profit from wars, and the struggle all around the world against greed in its myriad forms.

In conclusion, we believe Stopping the War Business achieved it's stated purpose to:
• create a space for activists disrupting war profiteering using different tactics to meet and
learn from each other,
• give opportunities for activists from other parts of the world to learn more about war
profiteering in Asia, including the arms trade in Asia and it's global impact,
• give opportunities for South Korean activists and the South Korean public to learn
campaign strategies from activists who organised successful campaigns elsewhere in the world. 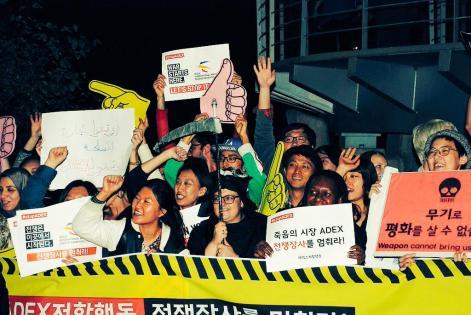 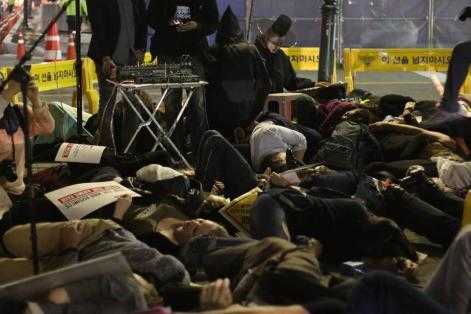 The day after the seminar, participants undertook a training  and briefing day, led by World Without War's nonviolence trainers. On the day, we split into affinity groups, and planned the nonviolent direct actions we would take over the coming days to disrupt the ADEX arms fair. Several actions sprung from this training.

More than 40 activists joined our actions against the ADEX arms fair  welcome reception. Two actions took place simultaneously. One occurred outside the JW Marriott Hotel, the venue for welcome reception dinner. Activists gathered by the main entrance to the hotel. As the arms dealers and governments delegations arrived, the activists held out banners that said "arms dealers are not welcome here." Activists chanted “shame on you” as the shuttle bus for arms dealer approached. Activists also rapped, sung resistance songs and danced to Korean resistance songs. Later we held a die­-in.

Alongside the public protest, some activists sneaked into the welcome reception venue in the hotel and surprised the arms dealers and government delegations with the banner and “blood money”.

The activists, from Germany, Korea and West Papua, chanted “Stop arms trade” and ­after several minutes were forced from the premises by security. 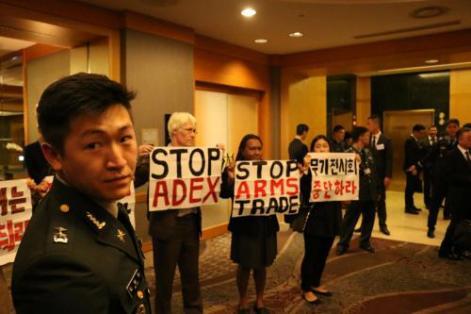 International and local activists also took action at the arms fair in the coming days. Some symbolic photo actions look place at the entrance to the fair, (see photos below).

During the fair it self activists went to the Lockheed Martin stall. Some pretended to be arms dealers, holding money seemingly covered in blood and saying 'Your pain, my gain', while others stood in for the victims of the arms trade, holding signs saying '2000 people killed everyday by the arms sold here'. 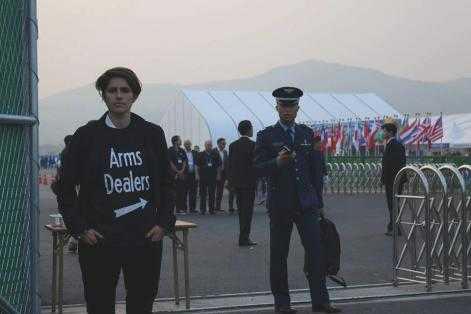 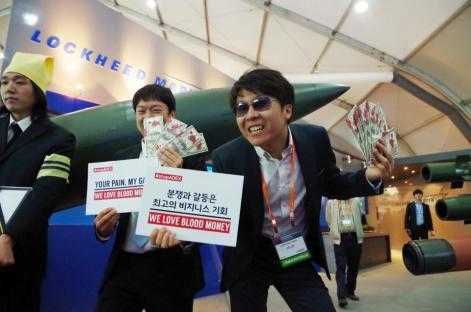 Moreover, they felt that participation in the action was 'empowering for Korean activists, as well as international activists', to take future action against the arms trade together. Participants felt that were not alone in the fight against war profiteers, and had a chance to share creative ideas in preparing the action. Taking part in an action together cemented some of the connections made in the seminar in the days before. The action was also supported by international activists
not in Seoul, with word spread through the networks of participating activists. 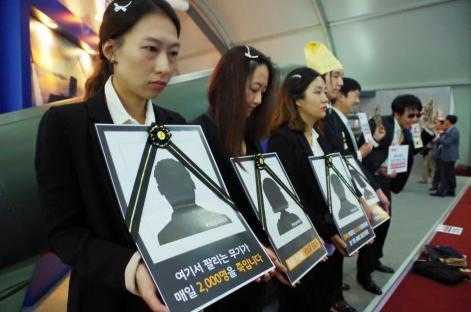 World Without War, along with other local campaigners against ADEX, held an evaluation meeting with the groups and individuals involved in our action. They are planning to produce a campaign promotion video including videos and photos taken from our action, to help mobilise for the next ADEX fair in two years time.

With the experience of the international action this year, they are thinking of ways to have a more united message in resisting the arms industry so that arms dealers travelling around the world could recognise our existence throughout the world.

They are planning to respond to specific arms trade cases such as tear gas exports to repressive regimes. In doing so, they will liaise with organisations who participated in our ADEX action.

Linking the seminar with an action was a deliberate attempt to a) increase capacity and solidarity with local campaigners in order to increase disruption and visibly strengthen opposition to ADEX b) develop relationships between participants, since taking part in an act of civil disobedience together strengthens relationships between people, building on the links made during the seminar and c) to fully utilise the presence of internationals – especially considering the ecological impact of international travel, WRI believes that meetings should be teamed with actions and other meetings wherever possible.

Thank you to everyone who took part 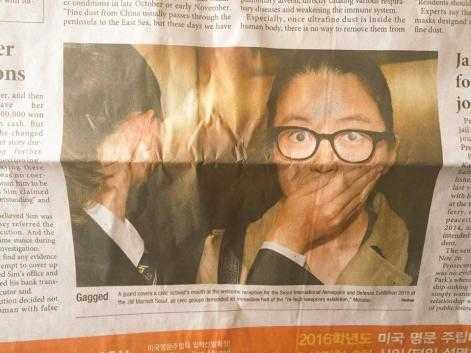