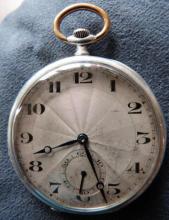 This beautiful, working watch belonged to Herbert Runham Brown (1879-1949), one of the founders of WRI.

It has been kindly donated to WRI for auction by WRI member and former staff person Wolfgang Zucht, in the hope that it might again be owned by someone connected with WRI who would appreciate its history, and be able to help to continue Brown's work through WRI in the process.

The auction has now closed. Thank you to everyone who bid!

Herbert Runham Brown (1879-1949), a builder by profession, was one of the founders of WRI. Runham Brown was imprisoned for 2 and a half years during the 1914-18 war as a total objector, undertaking hard labour.

His peace work started much earlier however, as he opposed the 1899 - 1902 "Boer War". He made his first public speech at the age of 20 when he denounced British concentration camps in South Africa.

Whilst in prison he edited the manuscript magazine which was secretly written and circulated among the conscientious objectors in Wandsworth Prison, and used remarkable means to have this news conveyed to the outside world. He was a member of the No Conscription Fellowship.

In 1930, Runham Brown wrote of his time in prison 'One night I sat alone in my prison cell. Men had been killing each other for three years, and for two years I had sat in this same little cell, looking out on the small cabbage patch which covered the space between my window and the great wall which surrounded the prison. My thoughts went back to the first night when the door had clanged behind me...It was all different now. Even in that prison we had broken through the walls. The iron bar no longer stopped all our communications; a grip of the hand was sometimes felt; and a comrade’s voice was often heard. Slowly but persistently we had broken every rule and crumpled up every bar that stood between friend and friend...And so I fell asleep to dream of the International of those who would refuse all war service, not to keep themselves unsoiled from the blood of their brother, but so that they might render the greatest of all service, that they might be his comrade and rekindle his faith in men...And so it happened that three years later, a little group of people met together in Bilthoven, in Holland, and the War Resisters’ International was born. Messages went out in the darkness like the first rappings on the walls, then we listened, and the answer came – slowly and quietly – but it came'.2

In the obituary Harold Bing wrote for Brown in 1949, he wrote 'The War Resisters’ International, in the course of the past 27 years, has become far more than a world-wide organisation standing uncompromisingly for pacifism: it has become a great living family bound together by ties of deep comradeship and a common philosophy of non-violence. It was the spirit of Runham Brown which created and sustained it. No one I have ever known expressed in his own life and action more clearly the principles which he held.'

Read more about Runham Brown's history in War is a Crime against Humanity: The Story of The War Resisters' International.

This watch has belonged for many years to Wolfgang Zucht, a WRI member in Germany. Wolfgang was a WRI staff member in the WRI office in the mid-1960s, when the office was based in Enfield, north London. Helga Weber, Wolfgangs wife, also worked for the WRI, first as a volunteer and later as a full-time staff member. Helga was later a Council member, and then Vice-Chair (with Myrtle Solomon as Chairwoman).

At the time the WRI Treasurer was Joyce Runham Brown, daughter of Runham. Joyce wanted the watch to stay connected with WRI, and offered it to Wolfgang, who purchased it in the late 1960s. It has been in their possession ever since.

Although we are unsure exactly how old it is, looking at markings and producers, we estimate it was made in the 1930s. The glass cover of the watch was exchanged once after being broken, so it is not the original cover. The watch has been repaired and works well. 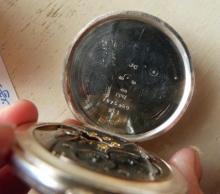 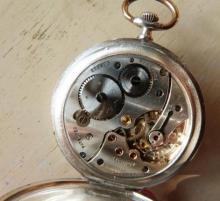 The auction has now closed. Thank you to everyone who bid!