The first International day of action For Military-Free Education and Research was organized by War Resisters International on June 14th 2013. Activists in India, Germany, South Africa, the State of Spain, Chile, Congo, the USA and Israel, called for a separation of the military from education.

In Israel, anti-militarist activists from New Profile, the Women’s Coalition for Peace and the American Friends Service Committee gathered to organize a street theater action that visualized the presence of the military in education. The “recruited classroom” which we staged included an exhibition of photographs and images that show the presence of the military, its symbols and its values, in the educational system: drawings of tanks and fighter planes in kindergarten worksheets, pictures of children wearing military berets saluting to their teacher-soldier (some soldiers in the Israeli military are stationed as teachers in schools in underprivileged communities), the photograph of a cannon placed inside a children’s playing ground, and many more.

Pupils in the recruited classroom marching in Tel Aviv to the military march beat of several popular Israeli children’s songs, the pupils in the recruited classroom took a physical education class (physical education is an official part of the “preparation for military service” curriculum in Israeli high schools), heard a kindergarten teacher tell them about the Jewish holidays, and attended a social science class—which all highlighted and ridiculed the military indoctrination that exists in all ages and aspects of the Israeli education system. The activists handed out leaflets and started conversations with people passing by, including high school students who just finished their day at a nearby school. Some of the pupils joined the activists in leafleting and calling for a military-free school.

In addition to the action in Tel Aviv, New Profile also collected articles and images, some produced especially for the action day, and some whose authors agreed to contribute to the collection. These articles are now available (in Hebrew only) on a designated webpage on New Profile's site.

In Seattle (Washington), USA, members of Washington Truth in Recruitment and Madrona-Leschi Citizens against War held placards near Garfield High School, whose Parent-Teacher-Student Association told military recruiters in 2005 that they were not welcome in the school (there was a student walk-out on this issue at that schools and others in the same year). The activists got lots of honks from passing motorists! 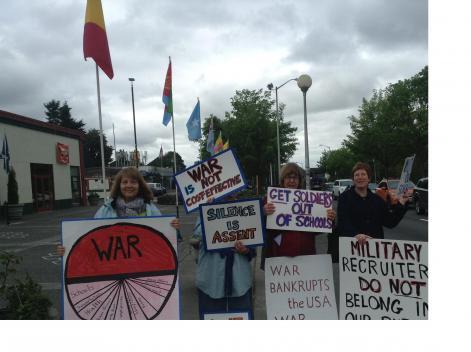 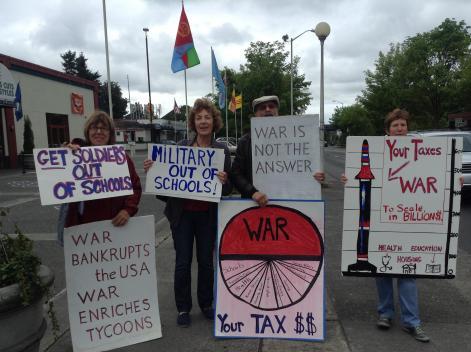 In Johannesburg, South Africa, a screening of the film The Last King of Scotland was followed by a fruitful discussion on how the audience felt about the film and how it relates to today. 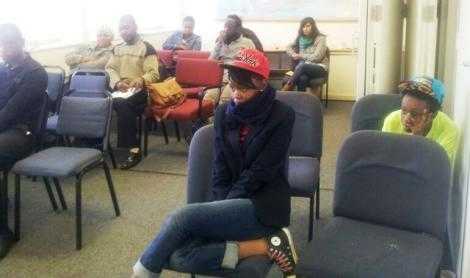 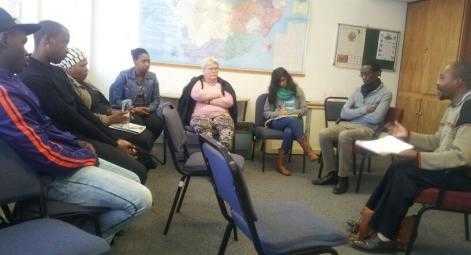 In Germany, where there were three days of action, from 13-15, actions on 14 June included 'undead' protestors subverting military propaganda outside the Herder school in Cologne. 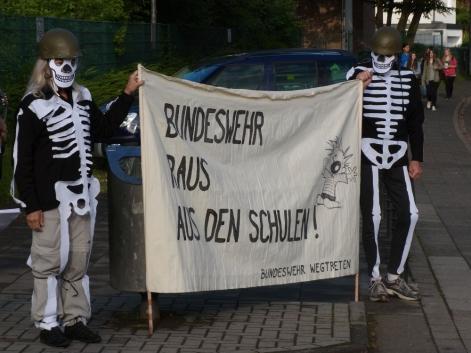 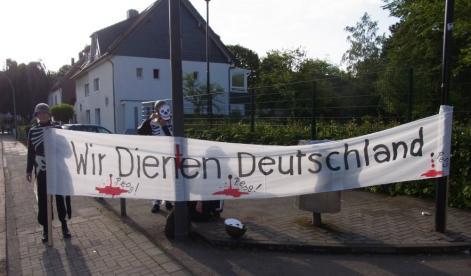 Pictures of actions from the other days of action in Germany can be found at: www.flickr.com/photos/michaelsvg/sets/

In the Fizi area of South Kivu, in the DRC, APDI went on a march, and held a workshop entitled "Fizi without soldiers: is it possible?"